According to Euroconsult’s Government Space Programs 2019 report, global government space budgets totaled $70.9 billion in 2018, posting a five-year compound annual growth rate of 5.75%. The increase extends the last few years of recovery that global space budgets have experienced since the 2015 low of $62.5 billion, the lowest figure since 2007. 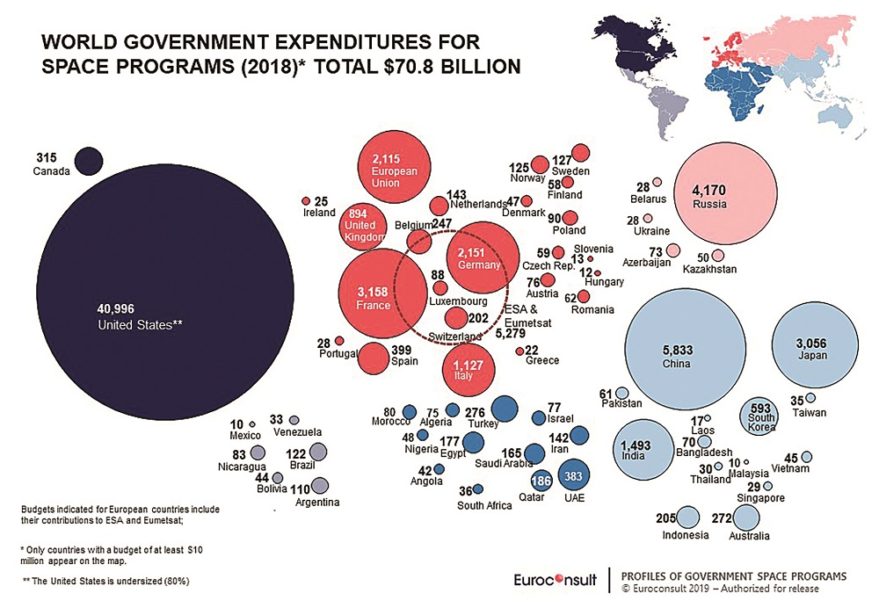 This historic low was caused principally by major downcycling in U.S. defense spending and significant Russian budget contractions (Russia saw its total budget shrink by nearly 60% in U.S. dollars; the loss was less severe in rubles, at only -22%).

Civil programs are driving the world’s space spending growth, totaling $44.5 billion in 2018, a 4.3% increase over 2017. The U.S. civil budget, growing at 4% five-year compound annual growth rate (5Y CAGR), propelled by the expansion of its space science, technology, and human spaceflight programs, is a main force behind the global growth. Civil expenditures of Asia and the Middle East and Africa (ME/A) regions, with 6.5% and 5.6% 5Y CAGRs, respectively, are also contributing factors behind world growth. 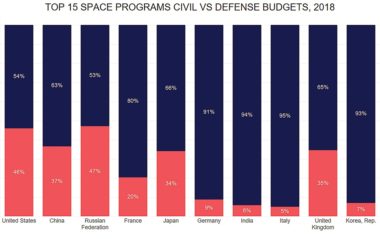 World budgets are forecast to continue their growth trend in the medium term, peaking at an estimated $84.6 billion by 2025, before downcycling. Over the next decade, growth drivers will reverse from the recent past: while civil budgets are expected to continue to grow moderately at an average of 1.6% per year throughout the 2020s, driven largely by leading powers investing in science, exploration and human spaceflight, short-term growth will be fueled by defense programs, growing by an average of 4.2% per year until the mid-2020s as U.S., Asian and ME/A defense budgets maintain their current upcycle until 2026, heavily impacting the world total. After this, world defense budgets downcycle, shedding about 4.4% per year until the end of the decade and stalling overall space budget growth.

Of 2018’s 79 civil satellites, 42% are for Earth observation, followed by satellite communications at 15%; the other 59 spacecraft were defense satellites. Governments are set to launch 1,553 new satellites over the next decade, averaging more than 150 per year.

The U.S., China, Russia, France and Japan represent the top five national space programs. The U.S. budget in 2018 totaled $40.9 billion, 58% of the world total, down from 75% in the early 2000s. The Trump administration has proven a vocal supporter of the space program, with selective spending increases (especially for defense budgets; civil has been more mixed, with exploration benefiting at the expense of science), program and organizational expansions (a Space Force and a Space Development Agency, as well as accelerated plans for a human lunar mission), and policy and legislative evolutions, particularly to facilitate commercial activities in space. Looking ahead, the civil budget is likely to grow smoothly, averaging 1.5% over the decade, whereas the defense budget will experience strong growth (5% annual average) in the short term, before downcycling in the second half of the 2020s, as it did earlier in this decade.

In 2018, China spent an estimated $5.8 billion. With a 5Y CAGR of 9.4% (11% civil, 6.8% defense), China has sustained one of the world’s highest launch rates, deploying multiple constellations simultaneously, with the Yaogen and Gaofen Earth observation systems and Beidou all rapidly deploying. On the defense side, spending is largely concentrated around its launcher and human spaceflight programs, with funding devoted to the Long March 9 launcher, its own space station, and a manned lunar mission. Looking forward, multiple satcom constellations will sustain civil spending in the short term, before spending declines in the early 2020s, while the nature of its defense budget (human spaceflight and launchers) protects it from usual budget cycles, allowing smooth growth over the decade. 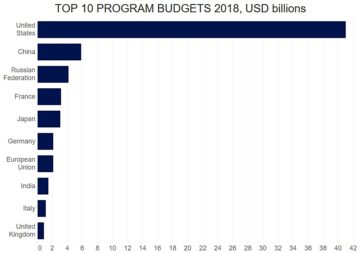 Russia was forced to heavily reduce spending over the past five-year period, from 2013’s high of $9.75 billion to 2018’s $4.2 billion. Its strategic plan calls for an increase in telecommunications capacity, a replenishment of its aging Earth observation systems, a streamlined launch fleet, as well as maintenance of Glonass. Russia’s budget is expected to continue to decline in the short term, though a recovery is expected by the early 2020s. However, considering the still-fragile state of its economy, the budget is forecast to reach $6 billion by 2028, equaling its 2011 level.

With combined national, ESA and Eumetsat spending of $3.2 billion, France is the world’s fourth-highest space spender and currently tops European national spending. Space situational awareness (SSA) is the priority of the new defense strategy, while completion of the Ariane 6 launcher development in 2020 should put an end to the growth cycle in European Space Agency spending. The civil budget is then expected to grow slowly while defense spending should be maintained at current levels before decreasing in the mid-2020s to support capacity renewal.

On the space application side, at $11.8 billion, Earth observation (including meteorology) is the highest-funded space application, often the first investment for emerging countries, and enduringly popular with leading programs due to its civil and military benefits. Human spaceflight, at $11.6 billion, concentrates investments in nine countries, though more, such as the UAE and India, are launching their own astronaut programs. Space science and exploration total $7 billion, with strong growth forecasts as post-International Space Station exploration missions gain momentum. Government launch funding ($6.7 billion) growth remains modest, as development is increasingly outsourced to the private sector. Satcom spending has halved from its historic high down to $5.8 billion in 2018, mostly due to U.S. defense cycles. Satnav’s $3.6 billion will grow until 2022 as the European Union and China complete their respective constellations, then stabilize as systems are replenished and upgraded. Space security, at $2.1 billion, in the past monopolized by U.S. and Russia, has seen more countries begin investments, as SSA increases in interest, both on the government side but also by private actors. 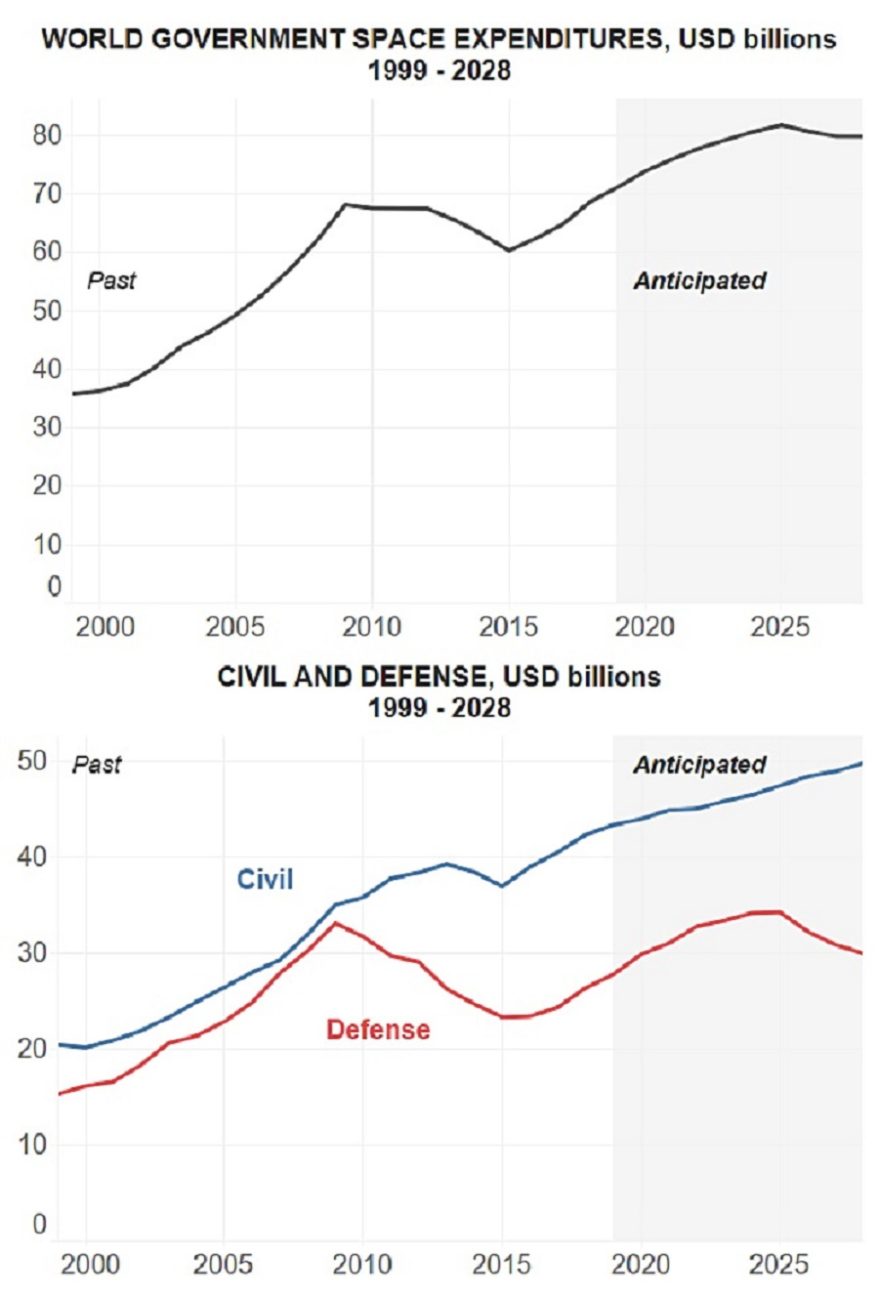 The number of countries investing in space continues to rise, totaling a record 88 in 2018. A decade ago, the number was slightly more than half of this, demonstrating that governments consider space as a valuable investment to support their national socio-economic, strategic and technological development. In 2018 alone, five new space agencies were launched, including Luxembourg, Australia, Zimbabwe, Greece and Portugal. The growing number of countries investing in space indicates that governments recognize that space assets bring socio-economic benefits to a country. However, a new rationale is also beginning to take hold: one of a country wishing to secure for itself a part of the growing commercial revenues generated by the space industry, valued at $271 billion in 2017 by Euroconsult. Indeed, several countries have launched space agencies with this explicit goal in mind, including Luxembourg, the UK, Australia and the UAE, with these (and many others) having the intention to set up commercially viable space ecosystems as part of their national space policies and strategies.

Looking forward, over the next decade, world space budgets are forecast to continue their growth trend in the medium term, peaking at an estimated $84.6 billion by 2024 before downcycling to the end of the decade. Civil budgets are expected to continue to grow smoothly at an annual average of 1.8% per year, driven by new entrants and leading powers investing in long-term science, exploration and manned flight programs. On the defense side, budgets will be fueled by increased spending in leading space powers, with India, Japan, China, and the U.S. all placing additional emphasis on space security as they invest in next generation systems, including a marked interested in SSA programs. As a result, world defense spending will surpass 2009’s record high and peak in 2025 at $34.3 billion, before beginning to downcycle afterward, mostly due to U.S. program cycles.

Simon Seminari is a senior consultant at Euroconsult and chief editor of the “Government Space Programs: Benchmarks, Profiles & Forecasts to 2028” report.

This article originally appeared in the Oct. 21, 2019 issue of SpaceNews magazine.