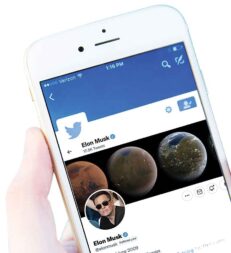 Musk describes himself as a “free speech absolutist” and has put social media next on the list of markets to disrupt after transforming launch with reusable SpaceX rockets and — more recently — setting sights on satellite internet with Starlink, the world’s largest megaconstellation.

Although he has yet to detail specific changes to Twitter’s policies, some activists and civil rights leaders fear he could reverse years of efforts to reduce misinformation, hate speech and harassment on the platform.

Getting the balance right to facilitate free speech effectively is a core challenge for media. The war in Ukraine also shows how this issue extends to the companies that connect and distribute it.

“Starlink has been told by some governments (not Ukraine) to block Russian news sources,” Musk tweeted March 5. “We will not do so unless at gunpoint.”

Satellite operators that sell capacity used to broadcast news and other content are also being pressured to intervene to control the information around Russia’s invasion.

Activists have singled out Europe’s Eutelsat in particular because of ongoing cooperation with Tricolor and NTV Plus, two Russian Pay-TV firms that are using its satellites to broadcast pro-Kremlin content.

Tricolor and NTV Plus have removed eight Western channels since the war while keeping those distributing propaganda in Russia, according to analysis from the recently formed Denis Diderot Committee campaign group.

While some broadcasters appear to have dropped these channels themselves following Russian news laws, or out of concern for journalists working in the country, others were canceled beyond their control.

France-based Euronews, for instance, said March 22 that Russia’s media authority pulled the channel off-air and blocked its websites in Russia after its Ukraine coverage was labeled “fake news.”

Lange said his campaign to sanction Tricolor and NTV Plus is getting support from “various high level civil servants” in Europe that he declined to name.

He said the group hopes “the scene will be clearer in France” following the recent reelection of France President Macron, however, “Eutelsat being considered as a national industrial” jewel makes its case difficult.

“Eutelsat is in compliance with the international sanctions currently in force, and remains attentive to their potential evolution in coordination with the competent authorities,” Eutelsat spokesperson Marie-Sophie Ecuer said.

She pointed to how Eutelsat “immediately” suspended broadcasts of the Russia Today TV station outside of Russia following EU Council Regulation issued March 1.

However, no “regulator has thus far ordered us to suspend the broadcast of Russian channels broadcast by Pay-TV platforms exclusively in Russia.”

She said Eutelsat seeks to play no role in how Tricolor, NTV Plus and other Pay-TV platforms define and implement their editorial policies.

“Eutelsat operate a strict policy of neutrality and unfailingly adhere to decisions of our competent regulatory bodies on all channels broadcast on our satellite fleet,” the spokesperson added.

Eutelsat does not disclose the revenue it generates specifically from broadcast services in Russia. The company said 6.3% of its revenues came from Russia and Central Asia for the 12 months to the end of June 2021.

While Luxembourg-based satellite operator SES doesn’t provide capacity to NTV Plus or Tricolor, it works with other Russian broadcasters that are not deemed to be pro-Kremlin.

Free speech is an emotionally charged topic that even Musk admits calls for more evaluation — critics of his free speech agenda have been quick to highlight the Twitter users that have been blocked from his account.

This article originally appeared in the May 2022 issue of SpaceNews magazine.

From the Magazine Elon MuskRussiaTwitterUkraine