by Maxime Puteaux and Alexandre Najjar — February 7, 2020
Reusability efforts and Starlink are two sides of the same coin

This article originally appeared in the Dec. 23, 2019 issue of SpaceNews magazine.

SpaceX’s technical validation of reusable rockets has opened new horizons for the launch sector while inciting the firm’s competitors to invest in technological innovation as a means to fight market share erosion. Prior to SpaceX’s market entry, launch industry innovation was limited largely to the optimization of existing rockets and the introduction of new launchers with similar or slightly lower costs, neither of which significantly changed overall market dynamics or the cost of access to space.

The global launch industry is undergoing significant change in both supply and demand, driven by innovation made possible by investments in technological evolution by existing stakeholders and new entrants alike.

Broadband megaconstellations are becoming a reality by entering deployment phase after the successful in-orbit validation of prototypes and the latest financing rounds of the most advanced projects, namely OneWeb and SpaceX’s Starlink. Other projects designed around larger satellites, such as Telesat LEO and Amazon’s Project Kuiper, are gearing up but have yet to commit to their suppliers. These four megaconstellations — OneWeb, Starlink, Telesat and Kuiper — account for 3,900 satellites, or 39% of projected demand for 2019-2028 with different go-to-market and vertical integration strategies, according to Euroconsult’s “Satellites to be Built and Launched by 2028” report.

In any business, competing with your customers is usually frowned upon but Starlink is SpaceX’s answer to the recent evolution of the satellite industry. By operating its own broadband constellation, SpaceX will eventually challenge satellite operators — and customers of its launch services — by providing connectivity services in the markets of satellite operators. SpaceX executives realized that higher revenues and margin could be found in downstream segments of the value chain compared with the low-margin launch business. Falcon 9 reusability efforts have been pursued under the rationale that each time SpaceX reflies a first stage, it lowers the cost and increases the profitability of the launch.

It is now understood that reusability, high launch rates and low-cost access to space are closely related and linked. All are elements of a virtuous circle that SpaceX is trying to achieve with its launch vehicle family and Starlink constellation. However, SpaceX technical success comes at a time when the satellite industry is experiencing a downturn in the satellite communications business (mainly broadcasting) — the largest and most profitable business of the satellite value chain. This downturn has had ripple effects on the level of satellite manufacturing orders and launch contracts, depressing demand for higher launch rates from the launch suppliers. With an advertised price of $62 million (possibly as low as $50 million depending on launch contracts), SpaceX already is the lowest bidder in a market that does not seem to be very price elastic. In addition, one can assume that SpaceX’s pricing for its new smallsat rideshare program ($1 million for 200 kilograms to LEO or sun-synchronous orbits) is intended to grow Falcon 9’s backlog, which is a high threat for small/micro dedicated smallsat launchers under development.

By being a vertically integrated company, it is in SpaceX’s best interest to push reusability as much as possible, and reuse boosters previously flown for paying customers to launch its own satellites at the lowest marginal cost possible, effectively decreasing Starlink’s cost structure compared to other constellations projects. This is why the first two Starlink launches in 2019 used first-stage boosters flying their third and fourth missions, respectively. As such, vertical integration combined with the deployment of large batches using reused boosters, will enable never-seen-before launch costs for satellites in this mass range. The same rationale can be applied to Amazon’s Project Kuiper constellation and Blue Origin, two separate entities which are owned by Jeff Bezos.

SpaceX has been learning and experimenting with reusability for several years, and its progress has been relatively fast and linear. Euroconsult’s tracking of reused Falcon 9 boosters suggests that boosters with more recent serial numbers are seeing shorter turnaround times between launches, as SpaceX acquires experience and learns to optimize refurbishment. While roughly a year was necessary to refurbish and relaunch the B1021 booster for SpaceX’s very first re-use of a recovered first stage for commercial customer SES-10 in early 2017, only 82 days were necessary to recondition and relaunch the first stage that launched CRS-18 in 2019. This is a significant improvement in terms of turnaround time, which goes a long way to enable a launch rate increase, and thus a launch cost decrease via the amortization of overhead costs over a greater number of launches. The average turnaround time between the first and second reuse of a booster (i.e., between the second and third launches of a first stage) is 160 days, and as low as 118 days in the case of B1046.

The fastest turnaround time between two launches of the same first stage was achieved in 2018 when SpaceX used the B1045 to launch NASA’s TESS and CRS-15 missions 72 days apart. This year, SpaceX turned around a pair of boosters, B1052 and B1053, for two Falcon Heavy launches 74 days apart. 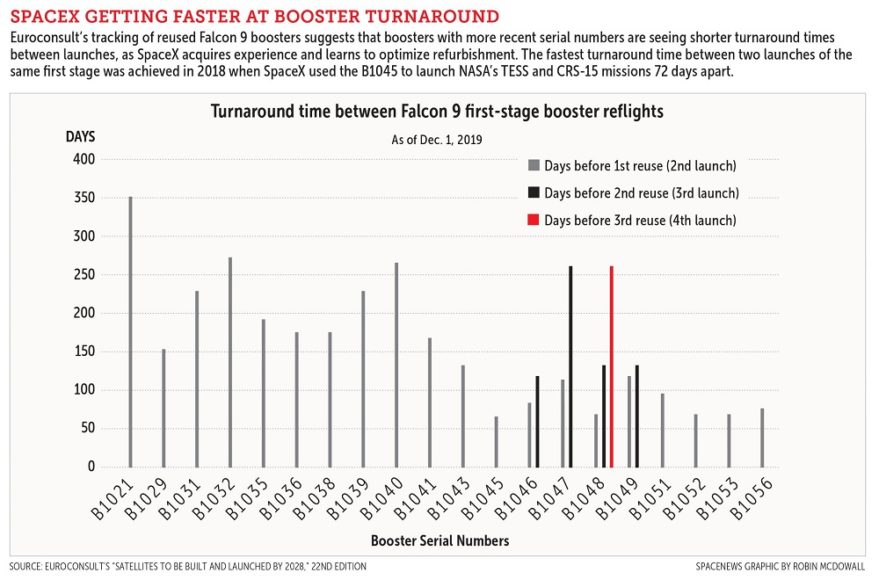 DESPITE EARLY RECOVERY SUCCESSES, MUCH REMAINS TO BE PROVED

It remains to be seen to what extent the time between consecutive launches of a reused booster is driven by refurbishment time versus the production lead time of new hardware such as the second stage and payload fairings (if the latter is not reused). If the wait for new hardware is driving the schedule, that would mean refurbishment is not the bottleneck for reusability.

Furthermore, we also notice that the second refurbishment (i.e. preparing the booster for its third flight after its second recovery) have always taken longer than the first refurbishment. This is true of all four boosters to date that has flown three times. While no rationale for this has yet been proposed by SpaceX, extra care and additional checks (fatigue detection, materials inspection, etc.) could be the reason, as SpaceX pushes the reusability envelope and strives to reuse a first stage 10 times. It remains to be seen whether this can be achieved, and if so, when.

SpaceX currently is developing prototypes of its fully reusable, super-heavy-lift launch system, the Starship spacecraft and SuperHeavy booster, with an extremely aggressive schedule. As SpaceX favors a low cost, a short development time and budget, and for heat transfer considerations during atmospheric re-entry, it has scrapped its carbon fiber Starship design, considered as too complex, time consuming and expensive, in favor of an all-steel design. In late 2019 and in front of prospective U.S. Air Force customers, Elon Musk has advertised a Starship marginal cost of $900,000 for propellant (i.e. less than the smallest and/or cheapest micro-launcher), and operations cost of $2 million per flight. While this doesn’t include development and refurbishment costs, it represents a massive change in terms of launch price per kilogram due to its expected 100 to 150 metric ton to LEO capability. Despite Starlink and Starship having simultaneous schedules, Musk had said Starlink revenue would help finance Starship’s development. The fact that Starlink is used both to justify Starship’s design choices and as a source of its financing will put strong pressure on SpaceX’s projects. While it remains to be seen whether Starship will reach orbit due to the numerous technical and funding challenges that remain on SpaceX’s path, and despite a schedule that seems too ambitious, the accessto-space sector should keep an eye on Starship’s progress, as the vehicle’s disruption potential is capable of radically changing the sector landscape.