Hypersonic weapons are drawing more media attention as China and Russia roll out new systems. These weapons, once deployed, will pose a critical threat to the United States at home and abroad.

Although this is an important national security issue, it is not one that is readily explained to non-expert audiences.

Hypersonic capabilities have the potential to rewrite the balance of power across land, sea, air and space. We need to demystify the technology to ensure the nation makes the necessary investments to secure U.S. leadership in hypersonics over the next decade. This is key in building a consensus around the implications of the rise of hypersonic weapons.

Gen. David Berger, commandant of the Marine Corps put it this way: “The people we have to convince in Congress, you can’t talk over their head, you have to talk in plain language. No acronyms, no complications, straight-forward.”

The simple way to explain hypersonic systems is that they’re about speed. They can travel faster than one mile per second, with speeds ranging from five times the speed of sound or Mach 5, up to at least 10 times the speed of sound, or Mach 10. For comparison, a typical cruise missile such as the Tomahawk travels at 550 miles per hour, or just over Mach 0.5, whereas the supersonic Concorde traveled at Mach 2.

Despite the recent interest, it’s important to note that hypersonic technology is not new. The first hypersonic test occurred at White Sands, New Mexico, in 1949 and was followed by tests of intercontinental ballistic missiles (ICBMs) during the late 1950s and 1960s, which regularly achieved hypersonic speed.

From a military perspective, hypersonic weapons are game-changing due to their high speed, range, greater survivability, and unpredictability. These weapons can carry conventional or, in some cases, nuclear warheads. When compared to traditional ICBMs and cruise missiles, hypersonics fly faster than ICBMs and have the maneuverability of a cruise missile, as well as additional deception capabilities. If used by adversaries, they would pose a serious threat to U.S. assets globally, from ships at sea to overseas bases, as well as potential decapitation strikes on national leaders or key nodes.

“We don’t have any defense that could deny the employment of such a weapon against us,” said Gen. John Hyten, vice chairman of the Joint Chiefs of Staff and former commander of U.S. Strategic Command.

More recently, HGVs specifically, have overcome long-standing technology hurdles associated with reentry and structural integrity. And the forthcoming generation of these hypersonic weapons will drastically shorten decision- and reaction-times at the tactical and strategic levels. Because next-generation hypersonics don’t need to travel a straight line to their targets, they are harder to shoot down. It’s also harder to tell who fired them, which makes it difficult to deter a hypersonic attack or retaliate against one. This increases the risk of miscalculation and unintended escalation.

From a defensive perspective, traditional antimissile and other air defense measures are of limited effectiveness against hypersonic vehicles and have not kept pace with the evolution of offensive weapons. “Our adversaries have taken advantage of what I have referred to as a holiday for the United States,” said Mike Griffin, undersecretary of defense for research and engineering.

Over this time frame, Russia and China have focused on developing hypersonic weapons, while the U.S. has been preoccupied by counterterrorism and counterinsurgency operations. This has allowed Russia and China to take the lead and potentially deploy weapons that threaten assets such as critical infrastructure, military bases and capital ships.

From a global perspective, the United States, Russia and China remain the global leaders, followed closely by India, which notably has a joint venture on a hypersonic weapon with Russia. Beyond these four nations, several U.S. allies are individually, or in cooperation with one another, pursuing hypersonic offensive and defensive capabilities, including Australia, France, Germany, Israel and the United Kingdom. 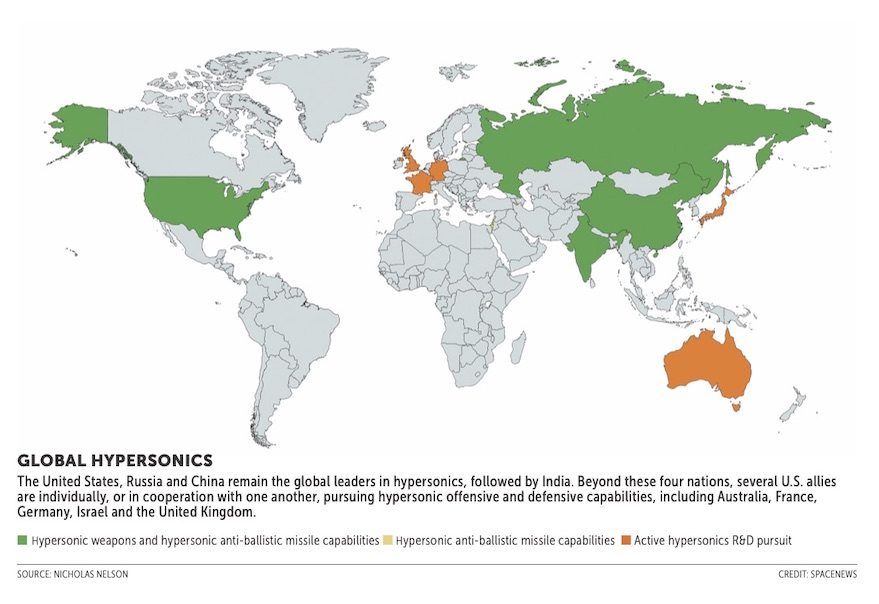 Within the U.S., the market is still largely concentrated on offensive weapons and countermeasures. Annual unclassified defense spending on hypersonic weapons is over $2.6 billion in fiscal year 2020 – including $157.4 million for hypersonic defense programs. Spending is expected to grow to $5 billion by 2025. Further, the international hypersonic market is predicted to grow at an annual rate of more than 7 percent over the next several years. In this environment, the Department of Defense is focused on building an offensive arsenal to act as a deterrent until a robust hypersonic defense strategy can be advanced and implemented.

Overall, while the U.S., China, and Russia are all working on both HCMs and HGVs, but Russia and China have pursued a different approach in fielding these. They are doing rapid sprints to develop and deploy hardware, while the U.S. is taking a longer approach, working to create a family of hypersonic weapons and countermeasures, with over twelve separate programs currently in progress. Finally, Russia and China are advancing nuclear-capable hypersonic weapons, whereas the U.S. is concentrating on conventional weapons.

The first iteration of the next generation hypersonic weapons being developed by the Pentagon are expected to be ready by 2022. Meanwhile, Russia is already fielding multiple HCMs, and has an HGV which is expected to be ready this year. China is not far behind, having successfully tested its new HCM and HGV multiple times, with both expected to be deployable in 2020.

The U.S. needs to close this gap and align across these disparate programs. One step in the right direction for the U.S. would be to ensure hypersonic weapon programs across the Defense Department and the services are better synchronized. To do so, the Defense Department, Congress and the industry need to agree on a common language. Often the discussion of hypersonics descends rapidly into jargon. This obscures key issues and complicates even basic discussions. One way to address this is through the Defense Innovation Board (DIB), either by standing up a new subcommittee or utilizing the existing DIB science and technology subcommittee bolstered by Defense Department subject matter experts. This could help develop a clear, holistic strategy.

Further, the Defense Department should form an interagency team to assess, aggregate and articulate the hypersonic and anti-hypersonic capability requirements to support U.S. military strategy. With over a dozen programs and initiatives across the Defense Department and the services, aligning around a common, agreed upon goal is crucial for success. Instead of pursuing multiple disconnected lines of effort, this team would deliver an integrated set of requirements that would help the industry target its own investments.

Establishing a clear baseline of understanding across these disparate groups is necessary to widen engagement, ensure greater support, and improve return on investment.

Nicholas Nelson is a strategy manager at an international consulting firm, where he focuses on emerging technologies in space and unmanned systems.

This op-ed originally appeared in the Dec. 11, 2019 issue of SpaceNews magazine.