by Debra Werner — September 10, 2020
“Not all the ideas are good ideas, but no ideas will be rejected out of hand.”

The National Oceanic and Atmospheric Administration is continuing to solicit input from government, industry and academia as it defines its next-generation weather satellite architecture.

“Not all the ideas are good ideas, but no ideas will be rejected out of hand,” Steve Volz, assistant administrator for NOAA’s Satellite and Information Service, said in August during a SpaceNews webinar. “We want to hear the best ideas in our community.”

Since April, NOAA has awarded dozens of six-month study contracts to small and mid-size businesses, large corporations and universities to flesh out ideas.

Through the study contracts, “we’re looking at certain areas where we had a lot of questions and wanted to get some engineering analysis,” Vanessa Griffin, NESDIS director of system architecture and advanced planning, said during the webinar.

Those constellations are expected to continue providing data into the 2030s, but NOAA is starting to plan replacements because developing weather satellites can take a decade and NESDIS is considering major changes to its approach. Instead of block upgrades every 20 or 30 years, the agency wants to continually evolve its capabilities by taking advantage of changing technology to meet the needs of weather forecasters and other data customers.

“We see an opportunity, based on the rapid expansion of capabilities and affordability of the small satellite revolution, that allows us to deploy satellites that compliment JPSS and our European partnership,” Volz said.

NESDIS is still defining its strategy for acquiring terrestrial and space weather data. Once the agency moves into the next phase of detailed design studies, it will seek input from “anybody with a good idea and the right assets to bring the table,” Griffin said.

In addition to identifying eventual replacements for GOES-R and JPSS satellites, NESDIS plans to begin to launch satellites equipped with sounders into low Earth orbit in the mid-2020s to fill data gaps created by the anticipated retirement of the Defense Meteorological Satellite Program and NOAA’s Polar Orbiting Environmental Satellites.

Through study contracts, NESDIS is obtaining information on instruments to mount on satellites in low Earth orbit. Other studies are exploring how the infrared, microwave or radio occultation sounders will operate. What are their size, weight and power requirements?

In addition, NESDIS studies are considering business models like hosting government sensors on commercial satellites and commercial firms selling data to the government as a service.

NOAA plans a pilot launch of sounder satellites in low Earth orbit “as early as 2025, certainly no later than 2026,” Griffin said.

Once NESDIS obtains the results of ongoing studies, the agency will seek more detailed information on certain topics. “That will be a competitive process, open to anybody,” Griffin said.

In preparing to update its architecture, NESDIS is looking beyond spacecraft and instruments. An extensive campaign is underway to modernize the agency’s ground infrastructure and information technology.

“We are looking holistically at how we provide value to the nation,” Volz said.

For example, NESDIS plans to move “major portions of our on-premises IT systems to cloud-based approaches,” he added.

Satellite command and control will not move to the cloud right away “but product development and data dissemination likely will” move, Volz said. “We see the scalability and speed of cloud operations is a clear service enhancement in many areas.”

This article originally appeared in the Sept. 14, 2020 issue of SpaceNews magazine. 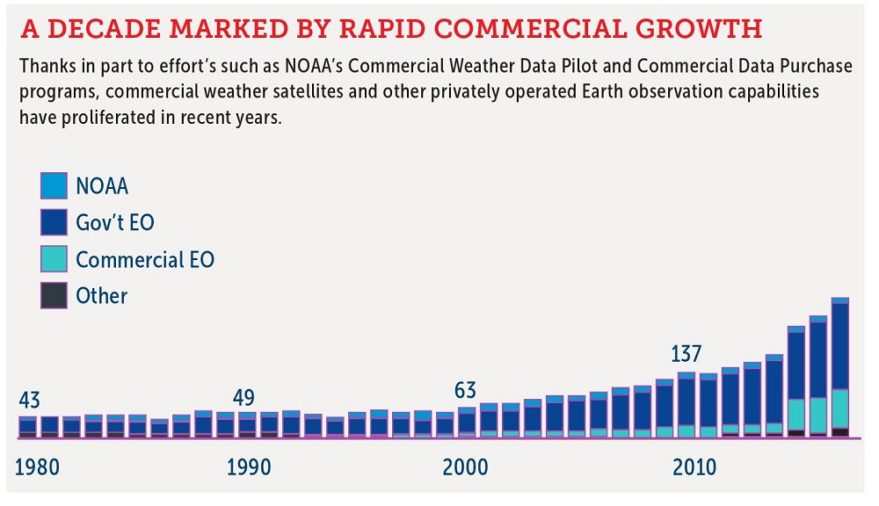