HELSINKI — China is preparing to launch its Tianwen-1 Mars orbiter and rover next week with the rollout of the mission’s Long March 5 launch vehicle.

The rollout indicates that China will launch Tianwen-1, the country’s first independent interplanetary mission, next week.

Final examinations and tests will be conducted before the launch, according to Chinese media. No launch date was announced, instead reports stated liftoff will take place between late July and early August.

Previous Long March 5 launches have seen a six-day period between rollout and launch. This suggests the launch will occur around July 23.

If successful the spacecraft will arrive at Mars in February 2021. The rover, inside an entry vehicle atop the orbiter, will remain attached to the orbiter in Mars orbit for 2-3 months before the landing attempt, a paper published in Nature this week confirms.

“The vertical transport of the rocket to the launching area has shown that we have made good preparations for the launching mission. We will stick to the strict and careful working attitude in the coming days,” Ge Xiaochun, chief engineer at the China National Space Administration, told Chinese media.

“The Mars probe is the first step of China’s planetary exploration project. The coming launching mission has been highly recognized and supported by the international community. We hope to contribute Chinese wisdom, ideas and solutions to the world for peaceful use of the space,” Ge said.

The Tianwen-1 orbiter carries seven science payloads. It is equipped with a high-resolution camera comparable to HiRise on board NASA’s Mars Reconnaissance Orbiter. It also carries a medium-resolution camera, subsurface radar, mineralogy spectrometer, neutral and energetic particle analyzers and a magnetometer. The orbiter, designed to operate for one Mars year, or 687 Earth days, will also play a relay role for the mission rover.

The roughly 240-kilogram solar-powered rover is nearly twice the mass of China’s ‘Yutu’ lunar rovers. It will carry a ground-penetrating radar, multispectral camera and a Laser Induced Breakdown Spectroscopy instrument. Other payloads will analyze the climate and magnetic environment. The rover will attempt to land in a southern section of Utopia Planitia where it is designed to operate for 90 Mars days.

The Institute for Space Research of the Austrian Academy of Sciences assisted in the development of the orbiter’s magnetometer. The L’Institut de Recherche en Astrophysique et Planétologie under French space agency CNES was involved in the Laser Induced Breakdown Spectroscopy instrument. Additionally, the European Space Agency’s Estrack ground stations will provide support during the early launch phase. Argentina space agency CONAE also has an unspecified role, according to logos present on the payload fairing. 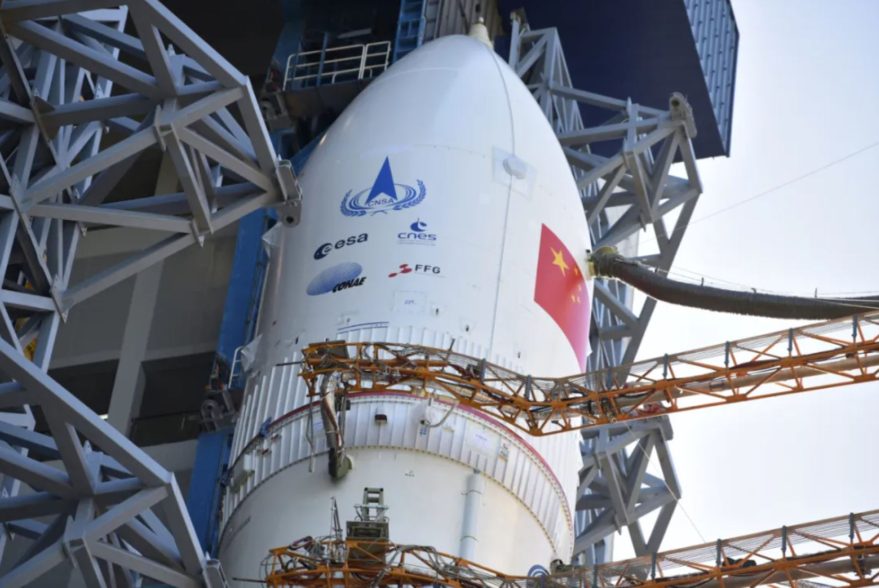 The Long March 5 was delivered on a roughly 30 by 20-meter launch platform, with a 70-meter-tall umbilical tower. Rollout from the assembly building to the launch area took two hours.

This will be the fourth Long March 5 mission. The second, in July 2017, failed due to an issue with the rocket’s first stage engines. The launcher was subsequently grounded for over 900 days while the issue was being isolated and addressed. The third mission in December 2019 was a high-stakes return-to-flight, success of which cleared the way for the Tianwen-1 launch.

The Long March 5 is part of a new generation of Chinese launch vehicles which use combinations of liquid hydrogen or kerosene fuel with liquid oxygen. These both expand China’s launch capabilities but could also eventually replace the older, hypergolic Long March rockets.

The Long March 5 is capable of delivering 14 metric tons to geostationary transfer orbit, 8.2 tons to trans-lunar injection, or 6 tons to trans-Mars injection. Tianwen-1 has a mass of around 5 tons.

The fifth Long March 5 is expected to launch the Chang’e-5 lunar sample return late this year. The second launch of the Long March 5B, a variant for LEO launches, will then launch the core module of the Chinese Space Station as soon as early 2021.

Updated at 6.38 a.m. Eastern with quote from CNSA official.