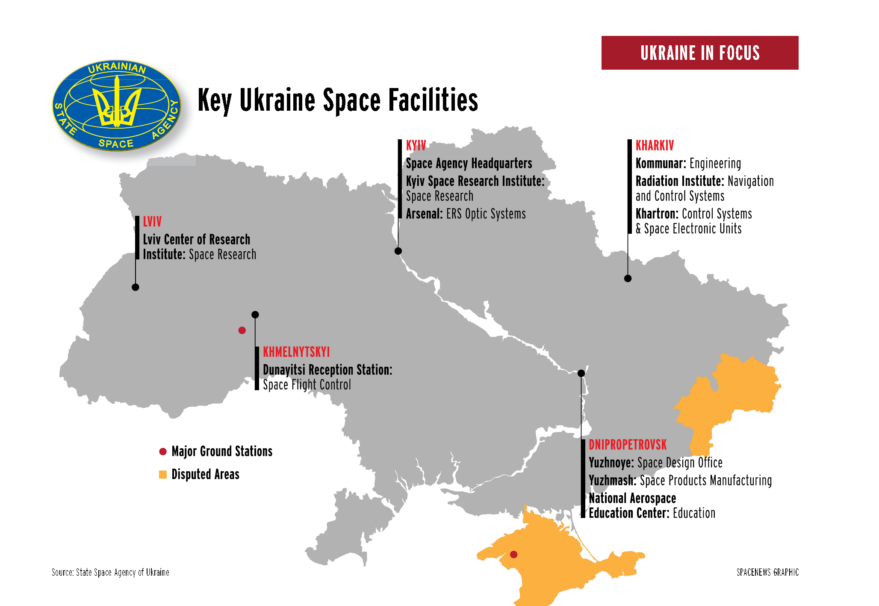 This article originally appeared as a subscriber-exclusive in the June 6, 2016 issue of SpaceNews magazine. 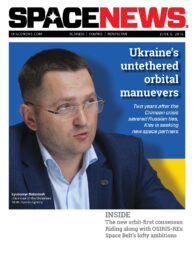 WASHINGTON — The last two years have been tough for Ukraine in general, and its space program in particular. Russia’s annexation of Crimea in 2014 meant Ukraine lost access to a major ground station located there. That annexation, and ongoing unrest in eastern Ukraine, have also cut off most business Ukraine’s space industry had with Russia. The conflict also put on hold plans to launch Lybid, a communications satellite for Ukraine built by Canada’s MDA Corp.

There have been other problems as well. Demand for Ukraine’s Zenit launch vehicle has dried up as Sea Launch suspended operations, and its future remains uncertain. Brazil backed out — for now, at least — of an agreement to host a launch site for the Cyclone-4 rocket. The failure of an Orbital ATK Antares rocket in October 2014 also affected Ukraine, as the rocket’s first stage is designed and built by Ukrainian firms Yuzhnoye and Yuzhmash.

Despite these problems, Lyubomyr Sabadosh, chairman of the State Space Agency of Ukraine, remains optimistic about the future. Sabadosh, who took charge of Ukraine’s space agency last August, hopes to restart some of those international ventures while establishing new relationships, particularly with American companies. In May, he visited the United States, representing Ukraine in the first meeting of a U.S.-Ukraine space cooperation working group in Washington.

Sabadosh, speaking through an interpreter, discussed those new cooperative efforts, and the overall state of the Ukrainian space program, in a May 26 interview with SpaceNews senior staff writer Jeff Foust.

You’re here in Washington for bilateral meetings with the U.S. government. What was the outcome of those meetings?

This meeting is a continuation of meetings we have conducted with the representatives of the U.S. State Department. As we have lost Russian markets, we are looking into opportunities to expand cooperation. To this purpose, and with the support of the U.S. State Department, we have established a working group. Its task is to identify issues that could be implemented by contractual relations with new partners and help Ukraine compensate for the loss of Russian markets. We got quite a list of offers. We presented our own proposals and hope for positive outcomes.

Are there specific areas of cooperation with the U.S. you’re most interested in pursuing?

We would be most interested in expanding our cooperation with Boeing and Orbital ATK. At the moment, we have a contract with Orbital ATK, and we hope the launch of the Antares vehicle planned for this year will be successful. It gives an encouraging signal to U.S. companies that Ukraine has technologies and scientific capabilities in terms of launch vehicle production, as well as spacecraft that could be used for other purposes. We also expect Boeing to bring up some ideas of their own in terms of how we can come back to the Sea Launch project.

Are you meeting with other organizations, like NASA, or other companies while you’re here in the U.S.?

We met with NASA and discussed the opportunities for running joint projects at the International Space Station. As part of the working group meeting, we had representatives of American companies who had meetings with representatives Vega project will also be discussed. We do hope for a positive outcome.

Is it a long-term goal for Ukraine to become an ESA member state?

Ukraine has strived to become a member of ESA for the past five years. So far, we have accomplished all of the requirements set by ESA in terms of entering this organization. It is one of many steps Ukraine makes to enter the European community.

What effect has the crisis with Russia over the last two years had on the Ukrainian space program?

We had many projects with Russia. We continue our cooperation with Russia, but only with projects that are related to peaceful space exploration and international cooperation. For example, the Soyuz control system is produced in Ukraine. However, all projects that had some sort of relationship to non-peaceful exploration have been terminated. This is why we look for some replacement elsewhere. When talking about the losses to the Ukrainian space industry, it’s in the millions of dollars.

What about capabilities you’ve lost, like the ground station in Crimea?

It’s very sensitive. It’s not that easy to replace it. Annexation of Crimea was one of the reasons why our Canadian partners on Lybid declared force majeure. We tried to compensate and use the facilities that already exist on the mainland. In fact, we have established a new center for satellite management and control not far away from Kyiv. That enabled us to continue the Lybid project. To compensate for the loss of Crimea in full … obviously, we can’t.

Are you working on other satellite programs?

Are you optimistic about the future of the Ukrainian space program?

By all means. Space is unlimited. Everyone will find their place there. Ukraine has a vast intellectual potential. We will be able to find partners that will be able to continue working with us into the future.