U.S. Space Force says its new seal is not a Starfleet knockoff

WASHINGTON — President Trump on Friday evening unveiled on Twitter the seal of the U.S. Space Force.

“After consultation with our Great Military Leaders, designers, and others, I am pleased to present the new logo for the United States Space Force, the Sixth Branch of our Magnificent Military!” Trump tweeted.

The image of the U.S. Space Force seal drew instant mockery on Twitter because of its striking resemblance to Star Trek’s emblem for the fictional Starfleet space force organization. 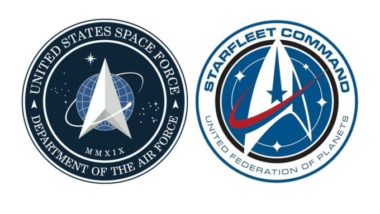 Several commenters with military backgrounds pointed out the that the U.S. Space Force seal, with the use of the delta symbol, appears to be inspired by the real-life space organization U.S. Air Force Space Command, and that it’s likely the creators of Starfleet drew inspiration from AFSPC, not the other way around.

Trump on Dec. 20 signed the law the created the U.S. Space Force by renaming the U.S. Air Force Space Command and making it a separate military service.

Social media posts noted that the design of the U.S. Space Force deal is a nod to the tradition of retaining a linkage to the organizational emblem from which the new unit was derived.

A spokesman for the U.S. Space Force said in a statement Friday evening that the seal “pays tribute to the newest armed service that organizes, trains, and equips space forces in order to protect U.S. and allied interests in space and to provide space capabilities to the joint force.”

In response to critics calling it a Star Trek ripoff, the spokesman said that the U.S. Space Force seal “honors the Department of the Air Force’s proud history” in providing space capabilities.

The delta symbol, the central design element in the seal, was first used as early as 1942 by the U.S. Army Air Forces and was used in early Air Force space organization emblems dating back to 1961, the spokesman said. “Since then, the delta symbol has been a prominent feature in military space community emblems.”

Star Trek made its television debut in 1966.