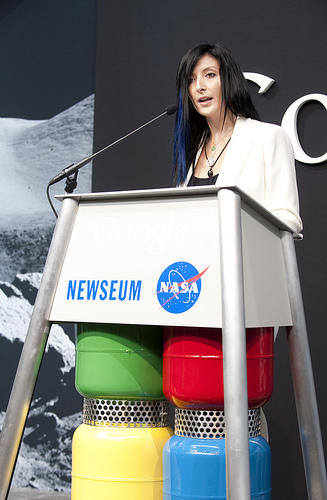 The New York Times profiles Tiffany Montague, a would-be astronaut who served in the U.S. Air Force and National Reconnaissance Office who now manages Google's space initiatives. Montague parlayed her 20 percent time — Google employees are encouraged to devote 20 percent of their work time on a project of their own choosing — into a full-time job.

Vladimir Popovkin, head of the Russian space agency, Roscosmos, said Oct. 7 that inspections have found that the Soyuz rockets intended to carry crew and cargo to the international space station do not have the flaw that caused the crash of an unmanned cargo ship bound for the station in August, the Associated Press reported.

Iranian officials acknowledged Oct. 12 that they had attempted to launch a monkey into space but the effort was a failure, AFP reported.

NASA is considering a $33 million offer by the top three executives at Google Inc. to salvage the historic Hangar One at Moffett Field in California, once home to giant U.S. Navy airships, the San Jose Mercury News reports.

SAN FRANCISCO — Teams competing for $30 million in awards as part of the Google Lunar X Prize are likely to have one additional year to reach the lunar surface and win the $20 million grand prize under a set of proposed rules issued to competitors. The proposed extension is being welcomed by many of the teams involved in the competition who face the daunting task of raising money for their efforts in a difficult financial environment.

SAN FRANCISCO — In anticipation of the United Nations climate change conference scheduled to occur in Copenhagen, Denmark, in December, Google Inc. is presenting a series of narrated tours through its popular Google Earth program that allow viewers to explore the environmental impacts of climate change around the globe.

NEW YORK -- As part of a newly released "Live from Mars" update for Google Mars 3-D, the general public can track Mars orbiters in flight and download raw imagery of the red planet within days or hours of it reaching Earth - a level of access once unheard of outside of mission control.

Four new teams have joined the Google Lunar X Prize robotic race to the Moon for a $20 million grand prize, the X Prize Foundation announced May 21.

William "Red" Whittaker and the wizards at Carnegie Mellon University's Robotics Institute in Pittsburgh, hope to use their expertise to snag the $20 million Google Lunar X Prize.

GOLDEN, Colo. -- Silicon Valley giant Google Inc. is teaming with the X Prize Foundation to launch a commercial race to the Moon with $30 million in incentives to collect along the way.

The organization created by 58 nations earlier this year to coordinate Earth observation and environmental data collection hopes to evolve into a Google-type service, collating data from ground-, sea- and space-based platforms into an easy-to-use Internet portal accessible worldwide, according to the group's new director.

TOULOUSE, France -- Google Earth, the popular Web-based geographic information system, has never received a protest from any government concerned about unwanted disclosures of sensitive military installations or any other subject, according to one of the system's founders.

WASHINGTON -- Google has joined forces with the United Nations in the use of satellite imagery and computer overlays to document some of the most pressing cases of environmental degradation around the world.

As the first crewed lander to the Moon in nearly 50years comes to rest on the lunar surface, billions of citizens participate in the descent through an interactive exploration console, switching their view between multiple camera angles and data streams on their personal computers. Millions more already have flown a simulated descent on the popular lunar exploration game distributed via NASA's Web site, NASA.gov, and compare their performance against the landing craft in real time. Video chat hubs explode with discussion as they coin names for the approaching craters and hills.