Pentagon to rein in defense and aerospace industry mergers

by Sandra Erwin — February 15, 2022
DoD says it will 'support the Federal Trade Commission and the Department of Justice in antitrust investigations and recommendations involving the defense industrial base'

WASHINGTON — The Defense Department, in a report released Feb. 15, says it will “strengthen oversight” of industry mergers amid concerns that corporate consolidation is undermining U.S. competitiveness.

DoD’s report on the “state of competition in the industrial base” comes on the heels of the Biden administration’s decision to block Lockheed Martin’s acquisition of rocket engine maker Aerojet Rocketdyne for $4.4 billion. The Federal Trade Commission sued to stop the deal over antitrust concerns, arguing that it would have given Lockheed a dominant position in a vital sector of the missile industry. This opposition led Lockheed Martin to terminate the agreement.

The Pentagon’s views on the Lockheed-Aerojet merger were redacted from the public version of the FTC’s complaint released Jan. 25. The new DoD report does not mention this particular merger but notes that “when a merger threatens DoD interests, DoD will support the Federal Trade Commission and the Department of Justice in antitrust investigations and recommendations involving the defense industrial base.”

“DoD faces a historically consolidated defense industrial base, making heightened review of any further mergers and acquisitions necessary,” says the report. “When markets are competitive, the Department reaps the benefits through improved cost, schedule and performance.”

When contractors compete against other firms, it “encourages them to perform effectively and efficiently,” says the report. “Insufficient competition may leave gaps in filling needs, remove pressures to innovate to outpace other firms, result in higher costs to taxpayers as leading firms leverage their market position to charge more, and raise barriers for new entrants.”

Mergers in the defense and aerospace sectors picked up steam in the 1990s and have continued ever since. The FTC noted that its action to stop Lockheed Martin from buying Aerojet Rocketdyne was the agency’s “first litigated defense merger challenge in decades.”

DoD’s prime contractors have narrowed from 51 to five since the 1990s, says the report. “As a result, DoD is increasingly reliant on a small number of contractors for critical defense capabilities.” 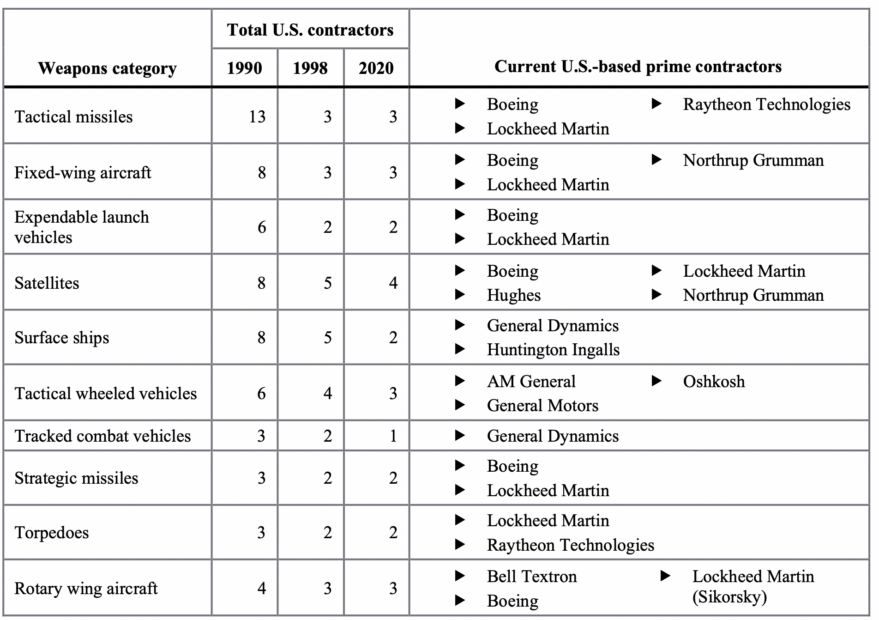