Overnight, or so it seems, space has become “red-hot,” facilitating new financing and exit options for space entrepreneurs and investors. A frequent question is whether this change in market sentiment is a flash in the pan or the beginning of a new, sustainable era? If the former, investors and executives would be well-advised to hastily run for the exit while the gates are still open. If the latter, then the space, the final frontier, is at last open for business.

Since its birth nearly 70 years ago, the space sector has depended almost entirely on government support, supplemented by limited corporate investment and practically no venture or private investment. This dynamic was upended in the 1990s, with numerous telecom and defense companies leading the charge to develop new rockets, broadband GEO satellites, and constellations of LEO satellites. The spectacular demise of this effort at the turn of the last century (epitomized by the bankruptcy of LEOs like Iridium) vaporized enthusiasm for the space sector and sent investors packing for the hills. Nonetheless, new ideas and concepts (like LEO megaconstellations) were planted that would lay the seeds of today’s space boom.

Against this gloomy backdrop, SpaceX, arguably the most pivotal company in the space industry today, was founded in 2002. In addition to radically lowering the cost of space launch, SpaceX lured pioneering venture capital firms like DFJ into the space industry and kindled a newfound public excitement and fascination with the sector.

From 2010 through 2020, a full-fledged space technology revolution took hold as venture capital poured into the space sector, drawn by opportunities for disruptive business models and prospects for sizable economic returns. Annual equity investment in early- and growth-stage space opportunities grew explosively from less than $100 million in 2010 to well over $5 billion by 2020. Company business models have matured significantly in lockstep over that time frame.

However, a dark cloud was forming over the industry — the absence of successful exits. At conference after conference, attending VC investors lamented the protracted investment horizons and limited exit opportunities for space companies (and many investors have avoided the sector altogether for this very reason). Aside from a few microcap public offerings (largely providing growth capital versus investor liquidity), the only notable exit for a NewSpace company was Google’s 2014 acquisition Skybox Imaging for $500 million.

At the same time, many of the concepts and capabilities introduced by space technology innovators, such as proliferated LEO constellations, “responsive space” approaches, and new payload technologies, began to attract the interest of the defense and national security community — with defense contractors in tow.

Compared to the 1990s space boom, the current industry growth and investment cycle appears to have more sustainable and enduring foundations. In addition to lower launch costs, space companies have discovered Moore’s Law and adopted R & D approaches from the tech world, including rapid innovation, iterative hardware design, and a focus on disruptive cost reductions. These innovations, along with greater access to capital, provide new entrants with a pathway for disrupting the established order. 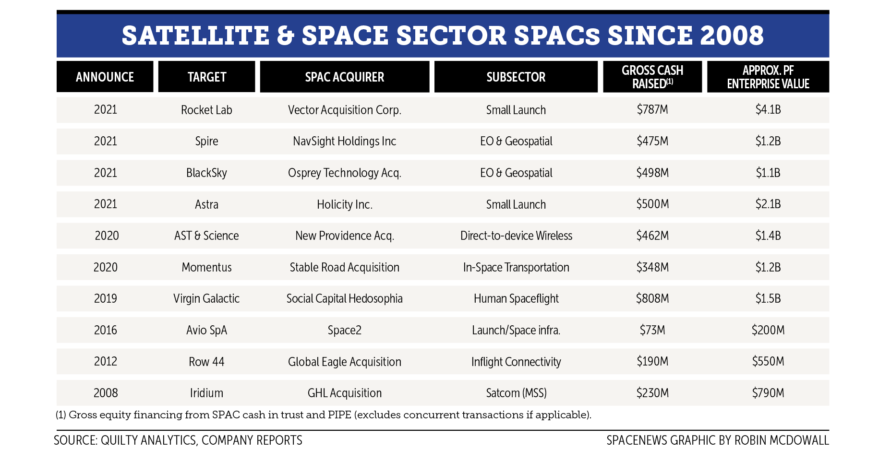 Over the past two years, large defense, industrial, and technology companies have taken note of this trend, completing well over a dozen acquisitions of space-related companies. While the establishment of the Space Force has had its fans and foes, hardly anyone disputed the underlying rationale for the effort — a recognition that space has become a warfighting domain and a strategic imperative for the country. As Northrop Grumman’s CEO stated in February, “We expect that areas like space will continue to rapidly grow … and it has been the fastest-growing segment of the U.S. Department of Defense budget the last few years.”

That said, large defense contractors are wary of buying small companies, thereby creating an opportunity for a new breed of private equity investors focused on vacuuming up numerous subscale space companies into an industrial-scale space products and services company. Already, there are a handful of major private equity-backed space platform companies (e.g., AMERGINT, BlueHalo, Redwire, and now Innoflight), with more likely to take shape during 2021.

Despite rising activity in the private sector, the frontiers of the space industry remained largely invisible to the public equity markets until July 2019, when Virgin Galactic announced its intent to merge with Social Capital Hedosophia. This marked the first Special Purpose Acquisition Company (SPAC) takeover of a fully space-driven company since Avio (2016) and, before that, Iridium (2008). The highly successful Virgin Galactic transaction (at one point surging to 6x original deal price) is often credited with kick-starting the current SPAC investment craze and spawning a newfound interest in space companies. This against a backdrop where more than 200 SPAC IPOs raised at least $100 million in North America in 2020, up from about 60 in 2019 across all sectors.

Why invest in space? SPACs, in general, have wide latitude in their search for an appropriate target company. In the current environment, many SPACs favor high-growth stories with large addressable markets and the potential for transformative change – attributes that arguably apply to many space companies. In addition, public interest in space stories has been further elevated by the announcement that renowned investor ARK Invest is forming a Space Exploration ETF with a core focus on investing in space-related public companies.

For space technology companies and their investors, SPACs are highly appealing. A SPAC can provide significant financing support with often venture-like valuations. The “typical” SPAC target can reap $250- 400 million or more in equity financing proceeds, representing an order of magnitude beyond what a typical VC financing round might raise. Additionally, while a SPAC transaction typically does not provide the target company’s investors with liquidity, the public markets provide these investors with a path to future liquidity. And a small subset of SPACs can provide value-add as partners post-deal.

Collectively, these benefits, when combined with the public’s appetite for space stories, have powered an unprecedented level of (pending) SPAC deals. We would guess that by around year-end 2021, there will be more than 40 public, true Satellite & Space companies worldwide, up from 30 that we tracked at year-end 2020.

We believe that many of the companies pursuing (or entertaining) a SPAC transaction are high-quality companies with exciting growth prospects. Will all of these companies succeed, or even survive, long-term? Unlikely. But the possibility of failure is not unexpected, at least for rational long-term investors. In our view, the more salient question is — what will be the medium- to longer-term impact of these financing vehicles on the space ecosystem? This dramatic expansion of the public space company universe will have clear impacts, and our internal analyses offer hints of the character of that ripple effect.

BLUE SKIES, OR CHANCE OF SHOWERS?

All good things must come to an end, and when the current spate of SPAC M&A subsides, will the industry once again retrench, ‘90s-style? While certainly possible, we believe the business and technology trends underlying the current investment cycle are sufficiently robust that new investors, new capital sources, and new advocates will emerge. New end-market applications, compelling national security needs, and the presence of tech titans like Amazon provide further reassurance of a broadly successful future for space.

On a larger scale, who will drive the next phase of industry growth and consolidation? Will it be the previously dormant tech titans? Will the defense primes step up further? Can M&A consolidation strengthen the financial pillars of the industry? There are a host of potential paths forward, but for our part, we are betting on many more “Iridium 2.0”-style success stories.

From the Magazine investorsventure capital