Technologies are no longer the only driver of innovation; this is about how, with innovations being combined, the ecosystem is rapidly maturing — and so are the solutions.

Big Data players such as AWS and Microsoft are entering the game. They not only host third-party data but are increasingly becoming key partners and indispensable intermediaries to deliver near-real-time information by shortening data-reception time to the ground and providing pre-processing analysis on the fly.

AN UNPRECEDENTED CONJUNCTION OF TECHNICAL INNOVATIONS

What we call Big Data is an efficient way to collect, manage, process, store, distribute and access a huge and continuous information flow that cannot be handled by humans. The key enablers are automation processing and virtualization.

Digital Globe (now Maxar) used in 2016 a semitrailer truck called Snowmobile to move its entire 18-year, 100-petabyte imagery library to AWS-S3. This first step, known as Infrastructure-as-a-Service (IaaS), enabled a second step, Platform-as-a-Service (PaaS) — a room for developers to create new tools and applications — and then a third one Data-as-a-Service (DaaS) to address the end-users. 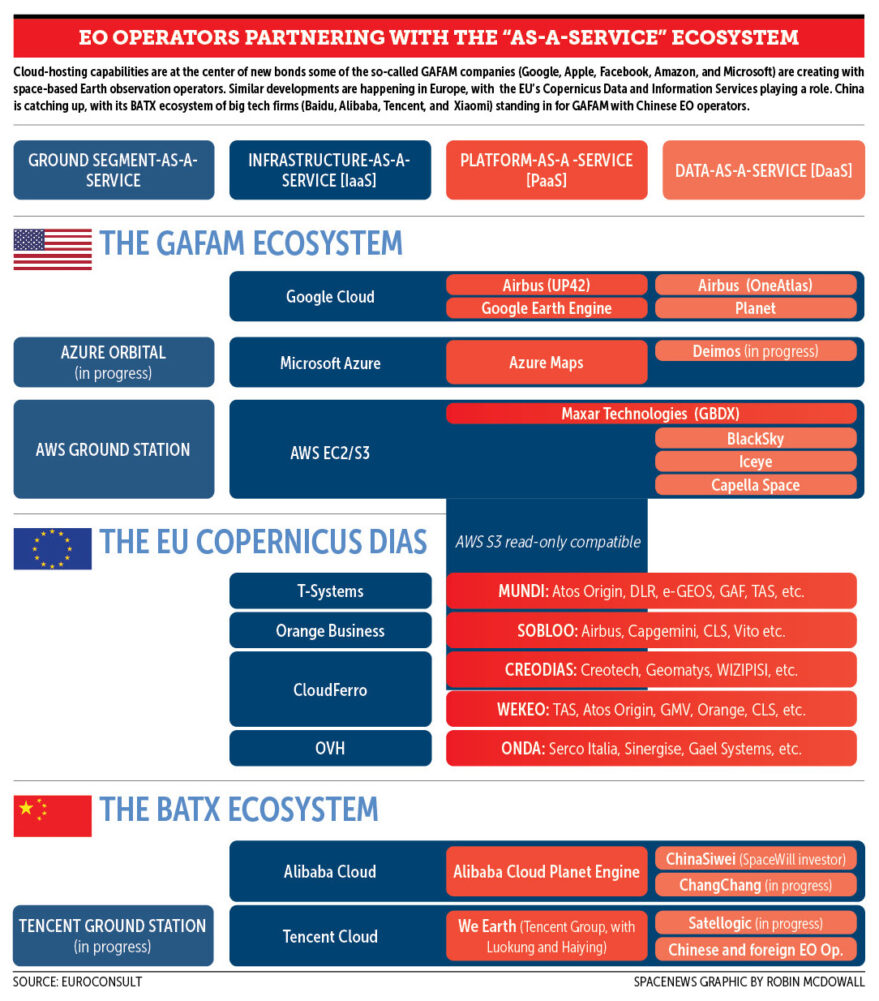 Companies such as Airbus Defence and Space and Maxar gave their customers instant access to their entire library leveraging new service development, with automated pre-processing imagery and online tools accessible through web-based platforms such as Maxar’s GBDX (Geospatial Big Data Platform) hosted on AWS or the Airbus’ OneAtlas Platform hosted on Google Cloud. EO operators can focus on their core business — outsourcing some hardware infrastructure and some development tools — in delivering information straight to their customers, opening new revenue streams through business-to-consumer and developing application-based on near-real-time analysis. This integration created a more entangled business environment between EO operators and the GAFAM as-a-service providers.

Going a step forward, Maxar has been testing the AWS Ground Station service since October 2018 and is now planning to use it with its upcoming WorldView Legion constellation. The Ground Station-as-a-Service model is maturing with Microsoft announcing the launch of Microsoft Azure Orbital.

Big Data is gaining traction along the value chain, from cloud computing to the ground segment. Incumbent operators as well as newcomers such as Capella Space and Iceye are using GAFAM’s Big Data infrastructure to scale up their business as well.

China is catching up: sustaining this development initiated in the U.S. and followed by European initiatives such as the Copernicus Data and Information Access Services, the future regional expansion of Big Data in EO is expected to come from the tremendous expansion of Chinese EO operator development using the Chinese BATX ecosystem (BATX stands for Baidu, Alibaba, Tencent, Xiaomi — China’s four biggest tech firms). Regional development is fostered by security and sovereignty concerns in data management as most of the information gathered from satellites is designed for security applications.

Alexis Conte is a senior consultant at Euroconsult where he focuses on a wide range of satellite and aerial EO applications. He previously worked for the French Agricultural Ministry and earned a master’s degree in applied geography from La Sorbonne University.

This article originally appeared in the April 19, 2021 issue of SpaceNews magazine.

From the Magazine Earth observation