Steve Howard is not superstitious, at least about a particular number. “Thirteen is my favorite number,” said Howard, the administrator of Camden County, Georgia, in early January.

Just a few weeks earlier, the FAA’s Office of Commercial Space Transportation (AST) awarded a launch site operator’s license, more commonly called a spaceport license, to Camden County, making it the thirteenth commercial launch site licensed by the agency. The license was the culmination of years of work, including extensive environmental reviews and coordination among many state and federal agencies. “This was a challenging project, with a lot of battle scars,” he said.

The license, though, is just the beginning of the project. The county on Georgia’s Atlantic coast now must acquire the land for the spaceport, build the launch facilities and attract launch providers. The spaceport still faces potential legal challenges, including a petition from county residents seeking a referendum that, if approved by voters, would effectively kill the project by blocking the county from buying the land.

Spaceport Camden would seem like a cautionary tale for other prospective spaceports that face regulatory, technical and business development challenges of their own. But state and local authorities pushing new projects seem undeterred by those obstacles or the fact that more than half of 13 FAA-licensed spaceports in the United States have yet to host a launch. 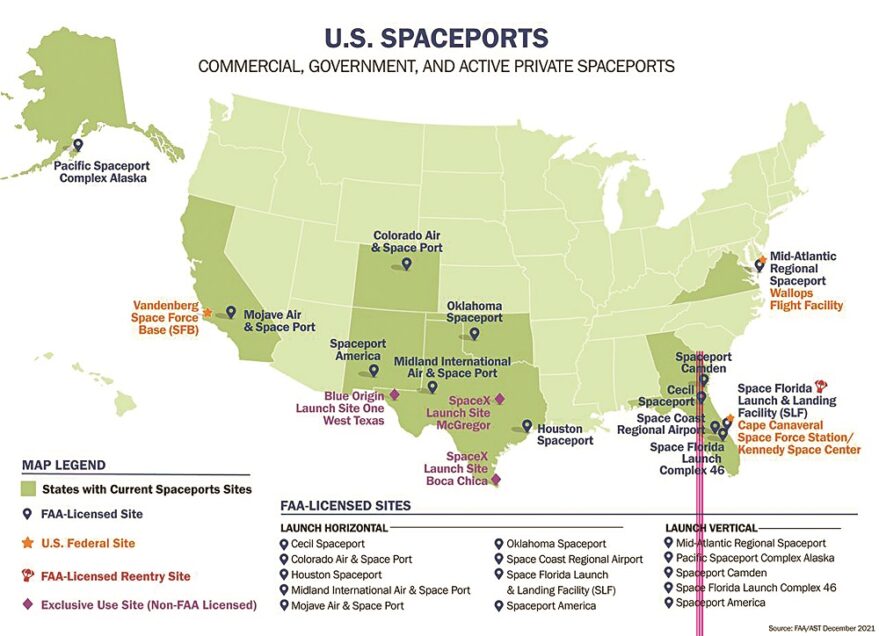 Despite this, new spaceport projects are being proposed from coast to coast. Last August, the city council of Paso Robles, California, approved plans to begin pre-application discussions with the FAA regarding a spaceport license for the city’s airport. The state legislature in Maine is considering a bill that would establish a Maine Space Port Corporation, a public-private partnership to establish launch sites in the New England state.

That exuberance, rational or otherwise, was evident at a meeting of the Global Spaceport Alliance in January in Orlando, Florida. Howard offered an update on Spaceport Camden’s progress to a packed room featuring officials with both licensed spaceports and those seeking licenses.

That latter group included Francisco Partida, representing the airport in Brownsville, Texas, which started the FAA licensing process last year. He says the city wants to leverage SpaceX’s activity at its nearby Boca Chica, Texas, test site known as Starbase. “We’re the closest airport to that facility and, as such, we’ve been trying to position Brownsville as your gateway to SpaceX,” he said.

It’s unclear what sort of launch activity the airport, which hosts commercial airline flights, would support. In the near term, the focus is on developing land around the airport set aside for an industrial park. “We attracted SpaceX to be our anchor tenant,” he said, with the company leasing 9,200 square meters of warehouse space that could be expanded.

That’s a model that other FAA-licensed spaceports have followed. Spaceport Houston, located at Ellington Airport near NASA’s Johnson Space Center, has been licensed since 2015 but has never had a launch. The facility, though, is attracting a cluster of space companies, such as commercial space station developer Axiom Space and lunar lander company Intuitive Machines, who are building offices, test facilities and mission control centers there.

In West Texas, Midland Air and Space Port got an FAA spaceport license to support launches by XCOR Aerospace, which intended to fly its Lynx suborbital spaceplane from the airport’s runways. XCOR has gone out of business, but the airport has retained its FAA license and attracted companies from other parts of the space industry like AST SpaceMobile, which is developing a satellite constellation for mobile telephony services.

More companies, including those working on rocket engines, are coming to an expanded spaceport business park, said Oscar Garcia, a consultant representing Midland at the Global Spaceport Alliance meeting. “We will have announcements soon of two new tenants,” he promised.

Spaceports, though, have their share of problems, including the licensing process. Most spaceports don’t face the same challenges that Spaceport Camden did to get a license, but some in the industry see room for improvement for how new spaceports are licensed.

George Nield, the former FAA associate administrator for commercial space transportation who now chairs the Global Spaceport Alliance, believes there’s an opportunity to streamline spaceport licensing by defining a “minimum-impact spaceport concept.” If a proposed spaceport fell below thresholds for factors like the size of vehicles it hosted and population density, he proposed, it could get a license right away.

The FAA is considering such concepts, said Pam Underwood, director of the office of spaceports at FAA/AST. The agency, which completed a revision of launch and reentry regulations in 2020 to streamline the licensing process, is turning its attention to other regulations, including spaceports. However, she said it was unlikely the FAA would get to spaceport regulations this year.

A bigger issue for spaceports is funding. Many prospective spaceports are not brand-new sites, like Spaceport Camden, but instead existing airports. However, they still need to build infrastructure for space activities, such as control centers, hangars and taxiways.

A long-running challenge for spaceports is a lack of federal infrastructure funding. Industry advocates have tried for years to establish a spaceport grant program similar to what is available for airports. They hoped the $1.2 trillion bipartisan infrastructure bill passed by Congress last year would include funding for spaceports. However, the final version, while including $284 billion in new funding for other modes of transportation, had nothing for space.

Nield blames that on the lack of advocates for the space industry, and spaceports in particular, in Congress. “There are few, if any, spaceport champions out there,” he said.

Airports that have spaceport licenses can seek FAA funding for infrastructure projects through the Airport Improvement Program (AIP) but are strictly limited to using that funding for aviation, not space, efforts. “Grant funding for airports is tough. AIP funding is very specifically for aviation,” Underwood said.

The FAA does have the authority to issue spaceport grants, she said, but has lacked funding for them. Underwood said her office is laying the groundwork for future spaceport grants by talking with others in the Department of Transportation on how they administer similar programs. “We can have a plan ready to go if we do get funding,” she said.

While the bipartisan infrastructure bill does not include any money specifically for spaceports, she added that those sites could seek funding the bill offers for other modes of transportation. A spaceport on the coast, for example, could get funding for port facilities, while others could get funding for road and rail projects.

Some spaceports have had success at the state level getting funding for projects. Cecil Spaceport, a former naval air station in Jacksonville, Florida, secured $13 million in grants last year from several state organizations, said Matt Bocchino, managing director of the spaceport. That funding will support new road and utility projects at the spaceport, which just completed a new air traffic control tower and mission control center.

State funding, though, brings with it its own issues. A prime example: Spaceport America in New Mexico, where the state spent more than $200 million for a spaceport with Virgin Galactic as the anchor tenant. With Virgin’s extensive delays getting its 18-year-old suborbital spaceflight venture into commercial operations, some are getting restless.

“We have a problem in New Mexico. We made a big investment and now we’re just saddled with this investment, and time keeps lagging on,” said Sen. George Muñoz, chairman of the finance committee of the New Mexico Senate, during a Jan. 27 hearing on the spaceport’s budget proposal.

He pressed state officials at the hearing to find new sources of revenue, including renegotiating its lease agreement with Virgin Galactic, so that the spaceport no longer needs state funding. “We can no longer subsidize a $250 million infrastructure project,” he said. “It’s just getting old.”

COMPETING WITH THE CAPE

Despite having more than a dozen licensed spaceports, the vast majority of launches in the United States still take place from Cape Canaveral in Florida and Vandenberg Space Force Base in California. That’s both an opportunity and a threat for new spaceports.

The opportunity stems from the concerns about concentrating launch activity, including for national security missions, at just a couple sites. “There’s really a pretty vulnerable spaceport infrastructure out there,” Nield said. “Those places are known for hurricanes, wildfires and earthquakes. You could also have a launch pad accident.”

There have also been concerns about congestion at Cape Canaveral in particular. Spaceport Camden, for example, has argued that it can provide better access to space for small launch vehicle companies than the Cape, which is dominated by launches from SpaceX and United Launch Alliance.

However, the Cape may be more accommodating to small launch vehicles and increased launch rates. Astra Space selected Cape Canaveral’s Space Launch Complex 46, operated by Space Florida, for a launch in February that will be its first outside of Alaska. The Kennedy Space Center in 2020 opened Launch Complex 48, a “clean pad” site for small launch vehicles that require little infrastructure.

The Space Force is anticipating much greater launch activity at the Cape. A forecast from May 2021, published Jan. 5 in a Department of Defense Inspector General audit of range infrastructure, projected launches from the Eastern Range to increase to 121 in 2026, nearly four times the number of launches in 2021. Nearly all of that increase comes from commercial launches.

Col. Mark Shoemaker, vice commander for operations of the Space Force’s Space Launch Delta 45, said at the Global Spaceport Alliance meeting that the range has been working with launch companies and the FAA on ways to maximize the capacity of the launch facilities there, including both the number of launches it can support as well as decreasing the time needed to schedule launches.

“In the end, we are all working towards the same goal: maximizing throughput, maximizing mission success, maximizing opportunity for all actors on the range,” he said. “We’ve been successful the last two or three years as the rates have gone up.”

Current efforts won’t work indefinitely, he cautioned. “At some point, within the current structures and the current institutions that we have, we’re going to hit a limit,” he said. “I don’t know when and where that limit is, and I’m not sure we’ll know we’ve hit it until it’s right in front of us, but we’re trying to understand what is.”

The Space Force has range modernization plans, known as “Range of the Future,” to ensure it can accommodate that growth. That effort, though, worries some spaceports, fearing that Cape Canaveral will get federal funding that remains unavailable to them.

“For those of you worried about money, we’re not asking for more money from appropriations,” said Col. James Horne, deputy director of launch and range operations for Space Systems Command at Patrick Space Force Base, Florida. “We’re using existing appropriations that we have traditionally leveraged to sustain that aging infrastructure to modernize it.” That could include public-private partnerships to fund infrastructure improvements.

“We don’t think we’re competing with you,” he told Global Spaceport Alliance members. “As a matter of fact, I think it’s to our detriment if we do. We want to build a coalition of spaceports across the nation and the world, working together to really advance this industry.”

David Buck, a retired Air Force lieutenant general who is now president of BRPH Mission Solutions, said he understands the concerns of other spaceports. “The Department of Defense will acknowledge they don’t have the answers and commercial industry has the answers,” he said. He predicted the Defense Department would eventually “get comfortable” with using other commercial spaceports.

“I’m an optimist about the future,” he said but added that didn’t mean every emerging spaceport will be successful. “I think about half of the non-traditional ranges getting licenses will fail.”

Spaceport Camden’s Howard is hoping to be in the half that succeeds despite the challenges it still faces. “We’re looking to a very bright future as we come online,” he said, including cooperating with other spaceports. “It’ll be a win-win for everybody.”

This article originally appeared in the February 2022 issue of SpaceNews magazine.

From the Magazine spaceport