From the moon to the Earth: How the Biden administration might reshape NASA

NASA Deputy Administrator Jim Morhard had perhaps one of the more understated public reactions to the outcome of the presidential election.

“It’s quite a day for everybody, to say the least,” he said at the start of a presentation Nov. 7 to the Space Generation Advisory Council’s SpaceGen Summit, just three hours after a range of media projections, from The Associated Press to Fox News, declared Joe Biden the winner. He didn’t elaborate on that comment and dove into his previously scheduled talk about the agency’s activities.

Whether the outcome prompted elation or disappointment, the election of Joe Biden has left the space industry wondering what comes next. While Biden is a familiar figure in politics, after decades in the Senate and eight years as Barack Obama’s vice president, his views on space, and his plans for NASA, are far less clear.

The Biden campaign said almost nothing about space during the race for the White House, other than a couple statements congratulating NASA on the successful launch and return of the Demo-2 commercial crew mission this summer. “As president, I look forward to leading a bold space program that will continue to send astronaut heroes to expand our exploration and scientific frontiers through investments in research and technology to help millions of people here on Earth,” he said in one of those statements.

“One of the things that I found surprising is that the Biden campaign did not issue a space policy statement,” said John Logsdon, founder and former director of George Washington University’s Space Policy Institute. “So, we’re left with the Democratic Party platform said.”

That platform included one paragraph about space which Logsdon considered “very positive,” if not without much detail. The platform endorsed, in broad terms, much of what NASA was currently doing, from science and technology development to continued operation of the International Space Station and human space exploration.

Most in the space industry who read that passage took away two major changes a Biden administration would pursue. The platform mentions “strengthening” Earth observation programs at both NASA and NOAA “to better understand how climate change is impacting our home planet.” That fits into a broader interest in climate change, which is one of four priorities identified by the incoming Biden administration alongside COVID-19, economic recovery and racial equity.

“Managing the Earth’s ability to sustain human life and biodiversity will likely, in my view, dominate a civil space agenda for a Biden-Harris administration,” predicted Lori Garver, a former NASA deputy administrator during the Obama administration, during a Nov. 7 speech at the SpaceVision 2020 conference by Students for the Exploration and Development of Space.

Exactly how that will be implemented remains unclear. One possibility would be to accelerate implementation of the Earth science decadal survey though additional funding. “NASA is a national asset, and if properly directed and incentivized, we can make meaningful contributions to sustaining humanity,” Garver said.

The other change is in human space exploration. While the platform stated the party supported “NASA’s work to return Americans to the moon and go beyond to Mars,” it made no mention of a date for doing so, in particular the 2024 date set by the Trump administration last year. That’s led to speculation that the Biden administration will, at the very least, slow down the Artemis program, perhaps freeing up money for Earth science and other priorities elsewhere in the agency.

“I don’t think Artemis will get canceled. I also don’t think it will get any more money than what it’s currently getting,” said Wendy Whitman Cobb, a professor at the U.S. Air Force School of Advanced Air and Space Studies whose research includes space policy.

A 2024 human lunar landing might be ruled out even before Biden is sworn in on Jan. 20. NASA’s fiscal year 2021 budget proposal requested $3.2 billion for the Human Landing System (HLS) program to develop the landers needed to transport astronauts to and from the surface of the moon. The House, though, provided only about $600 million for HLS in a spending bill it passed in July.

NASA Administrator Jim Bridenstine, while publicly thanking the House for providing at least some money for HLS, lobbied the Senate for full funding to keep a 2024 landing on schedule. “Accelerating it to 2024 requires a $3.2 billion budget for 2021 for the Human Landing System, which is in the president’s budget request,” he told Senate appropriators in September.

Those appropriators released their draft spending bills Nov. 10, which will serve as the basis for negotiations with the House on a final version. For NASA, they provided $1 billion for the HLS program, more than the House but still far short of the budget request. In the report accompanying the bill, Senate appropriators noted the uncertainty surrounding the program “makes it difficult to analyze the future impacts that funding the accelerated Moon mission will have on NASA’s other important missions.”

The HLS funding was just one obstacle to a 2024 human landing identified in a report by NASA’s Office of Inspector General Nov. 12 that discussed the agency’s top challenges, also citing delays in the Space Launch System and Orion. It concluded that NASA “will be hard-pressed to land astronauts on the Moon by the end of 2024.”

“I don’t know anyone who thinks we’re going to get there by 2024,” Garver said. “No matter who won, this was going to be an impossible goal.”

“The transition teams really come in to see how things are doing and make recommendations going forward,” said Garver, who led the NASA transition team for the incoming Obama administration in 2008.

The agency review team for NASA is filled with people who either used to work at the agency or who are otherwise very familiar with it. Leading the team is Ellen Stofan, a planetary scientist who served as NASA chief scientist during the Obama administration and is now director of the National Air and Space Museum. Waleed Abdalati, her predecessor as NASA chief scientist, is also on the team. He was co-chair of the most recent Earth science decadal survey.

Others have a range of NASA experience. Pam Melroy is a former NASA astronaut who flew on three shuttle missions and later worked at the FAA’s commercial space office and at DARPA. Dave Noble, Shannon Valley and David Weaver all held policy and communications posts at NASA during the Obama administration; Valley is also a climate scientist.

Bhavya Lal, a researcher at the Science and Technology Policy Institute, has studied a wide range of space-related topics for NASA and other government agencies. Jedidah Isler, an assistant professor at Dartmouth, hasn’t previously worked for NASA, but her research in astrophysics complements the scientific backgrounds of other members of the team.

When the team will be able to start work, though, isn’t clear. The Trump administration has been slow to recognize Biden’s win, and the head of the General Services Administration, which controls the resources for presidential transitions, has yet to release those resources to the Biden transition. NASA officials did not respond to questions Nov. 12 about whether it had started discussions with the agency review team or what guidance it had received from the White House about supporting the transition. 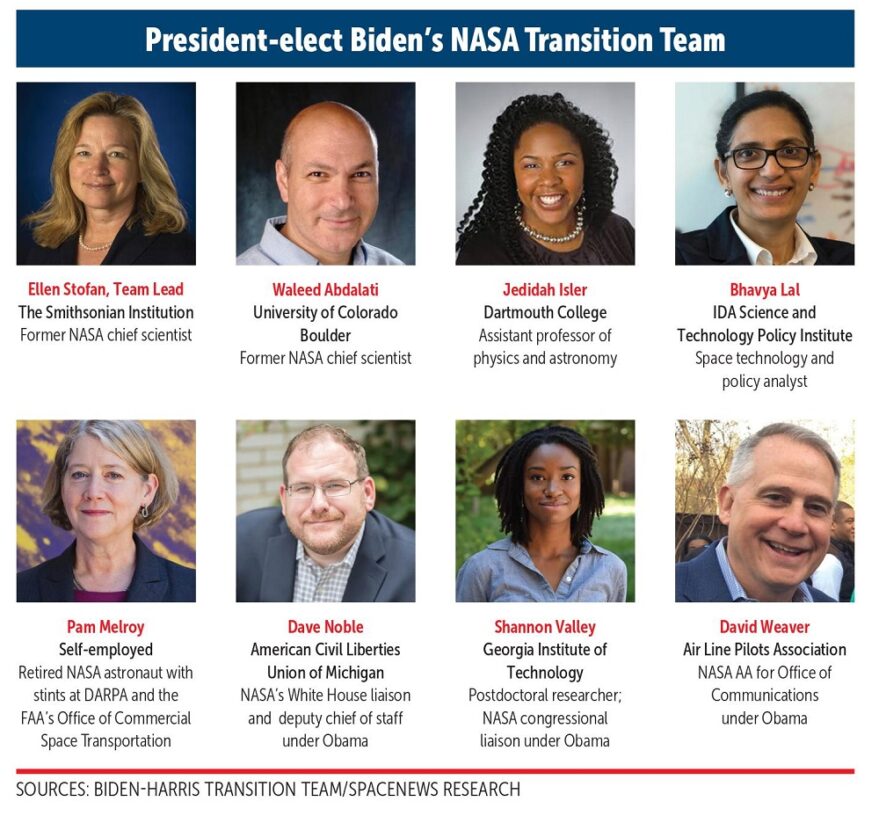 Another priority for the Biden transition is picking a new NASA administrator. Despite being confirmed on a close, party-line vote in the Senate in April 2018, Bridenstine had won over members of Congress on both sides of the aisle for his leadership of the agency. Some in the space community hoped that, even in the event of a Biden victory, Bridenstine could be kept on.

Bridenstine, though, plans to leave the agency at the end of the Trump administration, telling Aerospace Daily that he “would not be the right person” to lead the agency in a Biden administration. President-elect Biden’s NASA Transition Team The NASA administrator, he said, needed to have a “close relationship” with the White House, something that he, a former Republican congressman, lacked.

While the Biden transition has been quiet about its choice for a new administrator, there’s been plenty of speculation, dating back long before the election, about potential candidates for the job. That list is dominated by women, such as Melroy, the former astronaut on the transition team. Others include Wanda Austin, former president and chief executive of The Aerospace Corporation; Gretchen McClain, a former NASA official who later worked in industry and serves on the board of several companies, such as Booz Allen Hamilton; and Wanda Sigur, former vice president and general manager for civil space at Lockheed Martin.

Another possibility is Rep. Kendra Horn (D-Okla.), who lost her bid for a second term in November’s elections. Horn serves as chair of the House Science space subcommittee and has expressed skepticism about aspects of the Artemis program, including NASA’s ability to achieve a 2024 landing.

When a new administrator would take office isn’t clear, but experience suggests it may be months after inauguration day. The Obama administration did not nominate Charlie Bolden as administrator (and Garver as deputy administrator) until May 2009; the Senate confirmed them in July. Bridenstine, despite emerging as a top candidate for NASA administrator days after Trump won the 2016 election, was not nominated until early September of 2017.

Morhard, the current deputy administrator, will also likely be departing, something he quietly acknowledged in his SpaceGen Summit talk hours after Biden won. “Things are changing in the United States, we know that,” he said. “I’m certainly looking forward to the future and what comes next.”

This article originally appeared in the Nov. 16, 2020 issue of SpaceNews magazine.