A former NASA associate administrator for exploration argues that the lunar Gateway should be deferred if NASA is serious about achieving the White House goal of landing humans on the moon by 2024.

With one module under contract and a second soon to be formally awarded, NASA says development of the lunar Gateway, a key element of its Artemis effort to return humans to the moon, is moving ahead as planned.

NASA has awarded a contract to a small business for the development of a cubesat designed to demonstrate the use of the unique orbit planned for the agency’s lunar Gateway. 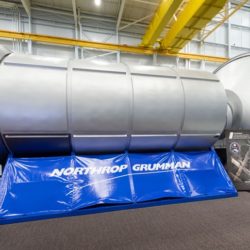 NASA has quietly decided to give Northrop Grumman a contract to build a “minimal” habitation module for its lunar Gateway after concluding it was the only company that could meet NASA’s schedule.

The Canadian Space Agency — NASA’s first international partner to commit to the lunar Gateway — is considering a faster schedule for its contributions to keep pace with NASA’s accelerated plans.

NASA has proposed to build a lunar orbiting space station, called the lunar Gateway, to use as a base for lunar exploration. This plan is severely defective.

Lockheed Martin says it has developed an approach to achieving the goal of landing humans on the south pole of the moon by 2024, but warns that construction of essential hardware would have to start soon to meet that deadline.

NASA Administrator Jim Bridenstine said the agency’s approach to moving up a human lunar landing from 2028 to 2024 will focus first on speed and then on sustainability.