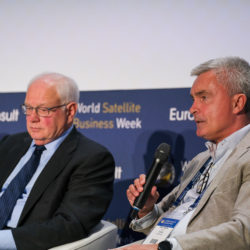 LeoSat hasn’t ruled out hiring Thales Alenia Space to build its scaled-down constellation, Rigolle said, but the company also wants to gauge bids from other manufacturers as it sets out in search of new funding sources sooner than anticipated.

OmniAccess, a maritime connectivity provider who demonstrated service with Telesat's prototype satellite, signed a “major, multiyear contract” for broadband service from the constellation.