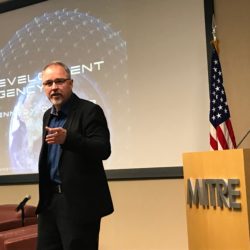 Kennedy says SDA will work with all the services. “Nobody said I have to build it all."

Inter-satellite links, a technology that has given some of LeoSat’s would-be investors pause, were actually what convinced Hispasat to invest in the low-Earth-orbit constellation startup last week, according to Hispasat’s CEO.

Telesat and MDA will be requesting money from the Canadian government’s new special fund to finance low-Earth-orbit satellite systems, officials from both companies say.

Low-Earth-orbit satellite fleet operator Globalstar is meeting with telecom regulators around the world in an effort to globally authorize some of its satellite spectrum for mobile broadband services.