FOR THE HEAD OF NASA, IT WAS ONE CLOSE APPROACH TOO MANY.

On Sept. 22, International Space Station controllers acted quickly to adjust the orbit of the station when U.S. Space Command informed them that an unidentified piece of debris would come within 1.4 kilometers of the station later that day. A Progress cargo spacecraft docked to the station fired its thrusters, nudging the station enough to ensure the object — later found to be debris from an H-2A rocket upper stage that broke apart last year — passed without incident.

“The space station has maneuvered three times in 2020 to avoid debris. In the last two weeks, there have been three high concern potential conjunctions. Debris is getting worse!” NASA Administrator Jim Bridenstine tweeted shortly after the debris passed. “Time for Congress to provide the Commerce Department with the $15 mil requested by the President for the Office of Space Commerce.”

Bridenstine was referring to the administration’s fiscal year 2021 budget proposal, which requested $15 million for the Office of Space Commerce, far more than the $2.3 million it received in 2020. Most of that money would go to carrying out the responsibilities for taking over civil space traffic management (STM) assigned to the Commerce Department by Space Policy Directive 3 in June 2018, work today that is carried out by the Defense Department despite widespread agreement it should be handed over to another agency.

Disagreement about which agency should take over civil STM, though, has stymied progress. The administration sought $10 million for the Office of Space Commerce in 2020, again primarily for STM work. Congressional appropriators, though, rejected that proposal. Instead, they added half a million dollars to the office’s 2019 budget of $1.8 million, and directed the office to use it on a study by the National Academy of Public Administration (NAPA) on which agency was best to handle STM.

To perform the report, NAPA convened a panel of experts chaired by Michael Dominguez, a former assistant secretary of the Air Force. That panel included Sean O’Keefe, best known in the space community as a former NASA administrator but who also previously worked at the Pentagon and Office of Management and Budget.

“It became very apparent, from the earliest meetings and discussions that we had, that this is a looming challenge that is becoming more and more difficult, almost exponentially,” O’Keefe said of the committee’s study of space traffic management during a SpaceNews webinar Oct. 13. “You then begin to inventory up the range of federal agencies that are participating at present for their own interests, and for the individual public services they provide.”

For this study, that meant the Defense Department and the Office of Space Commerce as well as NASA and the FAA’s Office of Commercial Space Transportation, an agency that previously sought to take over civil STM before the administration decided to assign it to Commerce. The panel’s research included interviews with more than 100 people in government and industry, incorporating their comments into a detailed scoring system that assessed each agency’s technical, organizational and related capabilities.

“The report goes through a pretty explicit valuation, classification, determination of where those capabilities reside,” O’Keefe said, “and then thinks through what is the best entity to actually reach the broadest range of all the stakeholders, and be the primary coordination official.”

That effort ultimately boiled down to a single number: a combined score assessing the overall ability of each agency to take the lead on civil STM, on a scale of zero (“significant limitations”) to three (“very few or minor limitations”). The Office of Space Commerce came out on top with a score of 2.9, followed by NASA at 2.55, FAA at 2.25 and the Defense Department at 1.7.

The DoD’s low score surprised many, since it’s handling the civil STM job now by default. O’Keefe said the score reflected the fact that the Pentagon has its hands full with other work, including keeping its own satellites safe. “That’s a real operational challenge in and of itself. That’s consuming all their focus,” he said.

He added that the Pentagon isn’t equipped to deal with the wide range of commercial and international stakeholders for any civil STM effort. “That falls to the bottom of the list at the Defense Department,” he said.

The FAA had a similar issue, he said, given its focus on overseeing commercial launches. “FAA certainly has a very well-established set of capabilities” for handling launches, he said. “But as soon as you reach altitude and are in orbit, it’s a whole different condition.”

NASA, which has never advocated for taking over civil STM, scored surprisingly well, which O’Keefe credited to an “extended range of capabilities” both technically and through partnerships with other organization and countries. However, those capabilities are just a means to a bigger goal than STM. “Their objective is exploration,” he said.

The Office of Space Commerce came out on top, the report concluded, because it could focus on the civil STM mission while tapping capabilities elsewhere in the Commerce Department, as well as with others both inside and outside the federal government.

“The Commerce Department demonstrated that incredible expanse of reach to be able to touch each of those stakeholders on a regular basis,” he said, “as well as understand what those federal capabilities could be, and know exactly where those capacities reside, and to help put some coordination together to collaborate on that information and make it readily available to the emerging commercial industry.”

Needless to say, the Commerce Department was happy that the report endorsed the decision in Space Policy Directive 3 to give it responsibility for civil STM. “I am pleased to see that following an intensive survey of key government and industry stakeholders, NAPA’s findings independently validate that the Department of Commerce is the best civil agency,” said Commerce Secretary Wilbur Ross in a statement Aug. 20, the day NAPA released the report. 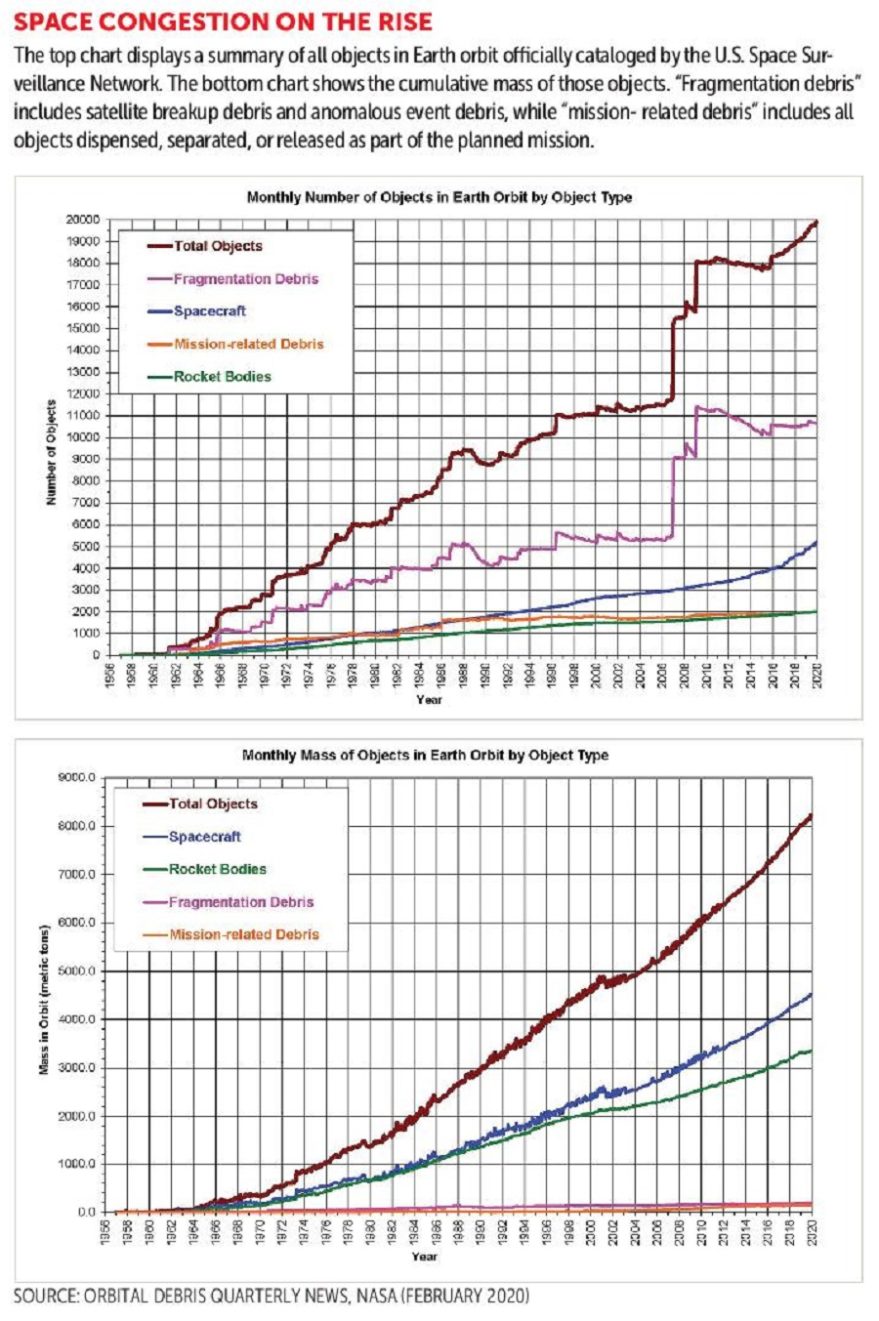 Others, both inside and outside government, back the report’s conclusion. Besides NASA Administrator Bridenstine’s endorsement, NASA’s Aerospace Safety Advisory Panel discussed the report and its recommendations at its most recent meeting Oct. 1.

“It is well overdue that the U.S. exert some effective international leadership in the safety of space operations, and begin doing so by designating a lead agency to provide timely and actionable safety data to all space operators,” Susan Helms, a former NASA astronaut and retired Air Force general who serves on the panel, said at that meeting.

“I cannot emphasize the importance of this issue enough,” added Patricia Sanders, chair of the panel, “and we really need some action taken now.”

Industry also supports giving the Office of Space Commerce that responsibility, although in some cases it’s less of an endorsement of the office’s capabilities and more of a desire for Congress and the White House to settle on an agency once and for all.

“Quite honestly, as an owner-operator, we’re ambivalent, as long as it’s being done,” said Walt Everetts, vice president of space operations and engineering at Iridium, during a panel discussion at the AIAA Propulsion and Energy Forum shortly after the release of the NAPA report. The Office of Space Commerce, he said, “is a fine choice, but I think we’ve probably debated it too long.”

That debate continues, though, because Congress hasn’t decided on funding for the Office of Space Commerce. A House version of a fiscal year 2021 spending bill passed in July rejected the office’s request for $15 million, with appropriators stating that they were awaiting the NAPA report. The Senate has yet to release its version of that spending bill, and neither House nor Senate appropriators have publicly commented on the NAPA report.

“We’ve been meeting routinely now with congressional staff and some congressional members to explain why this is so important,” said Kevin O’Connell, director of the Office of Space Commerce, during the SpaceNews webinar with O’Keefe. “We’re making the case as strongly as we can, not just from the office but from the secretary as well.”

O’Keefe, who earlier in his career served on the staff of the Senate Appropriations Committee, noted that the NAPA panel met with House and Senate staffers as part of the study. They told the panel their priority was finding the agency best able to integrate capabilities from across the government, which O’Keefe believes the Office of Space Commerce is best suited to do.

He also emphasized that the decision in Space Policy Directive 3 to give the office the civil STM mission indicated there had already been coordination among the agencies. “The strongest signal that was sent by that, all by itself, is that an effort had been engaged as part of the interagency process,” he said of the language in the directive. “That spoke volumes.”

O’Connell said the Office of Space Commerce is ready to move forward if it does get the $15 million from Congress. “Next year will be largely what I’ll call a ‘building block’ year,” he said. Besides hiring a “modest amount” of new staff, there will be a particular emphasis on building up the system the office calls the “open architecture data repository,” which will combine the space situational awareness data from the Defense Department with data from commercial and international partners, from which both the office and others can use to identify potential conjunctions.

By the end of 2021, he said, “we will have an initial architecture that is up and running.” That will mirror what the Defense Department provides now, in terms of data and conjunction notices, “but we’ll have an open place where we can start to experiment.”

That experimentation includes how to incorporate other data sources into that repository. “How do we bring that data into one place? How do we do it securely? How do we analyze it so that we’re providing a coherent picture of the space environment that’s trusted?” O’Connell said. The office will hold an industry day in late November to allow companies to pitch their ideas for providing data and improved conjunction notices.

“We have to make progress on many different fronts,” he concluded. “With an appropriate level of funding, we will be able to bring the data together to start to improve this, I think, very quickly.”

The catch, of course, is “with an appropriate level of funding,” an issue that remains uncertain. The Office of Space Commerce and others continue to advocate for that funding, including Bridenstine, who discussed it when asked about orbital debris at a Sept. 30 hearing of the Senate Commerce Committee on NASA’s programs.

This article originally appeared in the Oct. 19, 2020 issue of SpaceNews magazine.

Satellite operators are receiving warnings that their spacecraft are within 1 kilometer of another satellite or piece of tracked debris approximately twice as often as they did three years ago.

That was one of the key takeaways from data compiled for SpaceNews by Analytical Graphics Inc. (AGI), the Exton, Pennsylvania firm that hosts the Space Data Center, a platform that ingests information from Space Data Association satellite operators and compares it with commercial radar and telescope observations to assess conjunction risks and warn satellite operators.

In low Earth orbit, satellite operators typically evaluate the need for a collision avoidance maneuver when one of their satellites is expected to come within 1 kilometer of another object. Space Data Center and SOCRATES data indicate that in 2017, LEO spacecraft likely came within 1 kilometer of other objects an average of 2,000 times per month. Now, it’s closer to 4,000 monthly conjunctions.

Those are averages. For some satellite operators, conjunction alerts may be increasing even faster. “As steep as this curve is, there are operators that are seeing even higher conjunction rates than this curve depicts,” said Daniel Oltrogge, director of the AGI Center for Space Standards and Innovation. 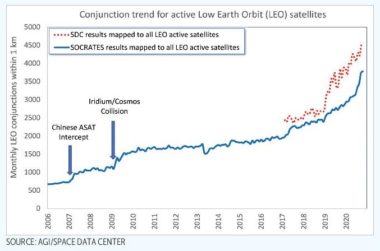 From the Magazine Space Traffic Management