by Debra Werner — March 24, 2021
"It validates the fact that the industry is maturing, and that it’s not a bunch of crazy rocket scientists out in the field blowing stuff up."

“We all knew it was going to happen,” said Dylan Taylor, Voyager Space Holdings chairman and CEO. “This is the way industries evolve.”

Venture capitalists bet $1.8 billion on space startups in 2015, which was more than the total space-related venture investment for the previous 15 years. Since venture funds generally have 10-year time horizons, investors tend to look for exits in five to seven years.

Even if the timing isn’t surprising, it is remarkable how the current wave of mergers and acquisitions coincides with investor attention.

“Public market and private market interest in space companies is higher than it’s ever been without a doubt,” Anderson said.

SpaceX deserves some of the credit, said Tess Hatch, a partner at Bessemer Venture Partners, a San Francisco venture capital firm with investments in Rocket Lab and Spire.

“I think a lot of people would love to own a bit of SpaceX,” Hatch said.

Many of the recent mergers and acquisitions stem from Amergint Technologies Holdings, Redwire and Voyager Space Holdings, which are purchasing space companies, as well as the special purpose acquisition companies (SPACs) wooing space startups with the promise of a shortcut to public markets. Meanwhile, government agencies are clamoring for innovative technology, which is prompting prime and subprime contractors to buy shares in nimble startups.

“To me it validates the fact that the industry is maturing, and that it’s not a bunch of crazy rocket scientists out in the field blowing stuff up,” said Taylor, a longtime space angel investor. 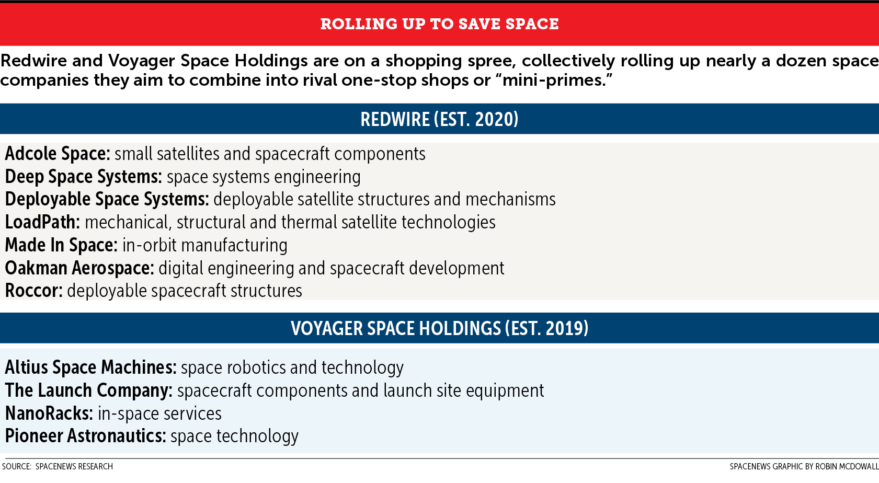 For most of the last decade, a handful of investment firms focused on the rapidly emerging entrepreneurial space sector. That changed in the last couple of years when Bank of America Merrill Lynch, Goldman Sachs and Morgan Stanley issued separate reports describing the future value of the space industry in trillion-dollar terms.

Voyager sees complementary capabilities in Altius Space Machines, The Launch Company, NanoRacks and Pioneer Astronautics, firms it has acquired since it was founded in 2019. Over the coming years, Denver-based Voyager plans to continue buying space companies in an effort to create something like a mini prime contractor.

“Ultimately when a bunch of decision-makers consider a moon mission or a private space station, we want to be one of the companies they think can actually do it,” Taylor said. “The idea is to take all the innovation but yet scale and professionalize it in such a way that you can do significant missions.”

Much of the recent financial news has revolved around SPACs that offer firms a cash infusion and access to a new breed of retail investors.

“There’s definitely a shift in the public market around how it thinks about risk in businesses that have yet to reach their future potential,” said Van Espahbodi, Starburst Aerospace co-founder and managing partner. The success of Robinhood, the commission-free trading app that gained fame through the GameStop trading frenzy, shows that you don’t have to be a Wall Street guru to know which companies are exciting and which ones you want to invest in, he added.

“Whether it be venture capital, private equity, a SPAC or even a traditional IPO, these are all just mechanisms for obtaining the capital that high-growth companies need in order to fuel their growth,” Cannito said. “At the end of the day, it really doesn’t have anything to do with your business model. Good companies attract capital and execute their plans and are successful.”

For space companies, the recent surge in merger and acquisition is likely to attract more investment.

“Something that was holding back the industry was the lack of exits and liquidity events in space specifically, and this year has definitely turned that around,” Hatch said. “When there isn’t a ton of data on possible exit scenarios that have come to fruition, it’s difficult to predict what your return on investment is going to be. Now that there are more exits, we have the data to better predict potential exit scenarios for space companies.”

That’s likely to lead to more venture investment and tee up more mergers and acquisitions.

From the Magazine Mergers & Acquisitions