Hot Topic: What happened to Zuma? Something appears to have gone seriously wrong with the secret government mission, code-named Zuma, that SpaceX launched Sunday night.

Exactly what, however, is far from clear. But if SpaceX keeps launching in the days and weeks ahead, we will be fairly sure Falcon 9 isn’t to blame for what went wrong.

The Wall Street Journal, citing unnamed industry and government officials, reported late Monday that the payload “is presumed to be a total loss after it failed to reach orbit atop a [SpaceX] rocket.”  Many took that to mean SpaceX’s first outing of 2018 was a bust. SpaceX, however, says Falcon 9 performed as expected during the classified mission and several independent analysts corroborate that assertion.

Nobody at the Pentagon or at Northrop Grumman — which provided the payload and its adapter — would comment, citing the sensitivity of the classified mission. SpaceX President and COO Gwynne Shotwell put out a statement Tuesday saying Falcon 9’s part of the mission went off as planned. “After review of all the data to data, Falcon 9 did everything correctly on Sunday night,” she said. And she noted that any reports that the rocket failed are “categorically false.”

Shotwell said preparations for SpaceX’s upcoming launches remain unchanged, another suggestion SpaceX doesn’t have concerns about its rocket’s performance Sunday. “Falcon Heavy has been rolled out to launchpad LC-39A for a static fire later this week, to be followed shortly thereafter by its maiden flight. We are also preparing for an F9 launch for SES and the Luxembourg Government from SLC-40 in three weeks.”

“I think we will know if it was an issue with the Falcon 9 because SpaceX would need to delay other launches to look into the issue,” Space expert Todd Harrison of the Center for Strategic and International Studies tweeted Tuesday.

Satellite tracker Marco Langbroek posted an image of a spectacular green-blue “spiral” taken by an airline pilot that “almost certainly” shows the Falcon 9 upper stage dumping fuel about 2 hours and 15 minutes after launch and prior to its planned reentry, suggesting nominal Falcon performance.

Space analyst Brian Weeden of the Secure World Foundation said “the most plausible explanation based on what we know is that the upper stage and payload didn’t separate fully, and the fuel dump/de-orbit burn by the upper stage either brought it back down, or put it in an orbit that’s too low.”

“We know the [18th Space Control Squadron] did indeed catalog an object from the launch, which they say was the payload,” Weeden told SpaceNews. “So unless that was itself a big mistake, something ended up in orbit for at least a brief period of time. And according to the 18 SPCS, that object is still on orbit (it hasn’t been marked “decayed” yet), although again they might not be as quick to make that change for a classified payload.”

Jonathan McDowell, an astronomer who tracks satellite launches, made similar points, noting that the goverment’s Space-Track orbital registry lists Zuma as USA 280 and gives it a formal catalog number, suggesting it spent at least a short time in orbit.

“Conflicts with [Wall Street Journal] story that payload failed to separate from second stage (which is believed to have deorbited itself),” McDowell tweeted Monday. “Consistent with SpaceX claim that rocket behaved correctly.”

McDowell, like Weeden, said it’s plausible Falcon 9’s second stage reentered as planned after 1.5 orbits, unaware that the payload was still attached. While that would normally point to a SpaceX problem, McDowell noted — as has been reported elsewhere — that Northrop Grumman  “provided its own payload adapter, so separation may be [Northrop Grumman’s] problem and not SpaceX’s problem.”

Those of us without the proper clearances may never know what happened to Zuma, but if SpaceX doesn’t break cadence in the weeks ahead, we’ll at least be reasonably sure Falcon 9 isn’t to blame.

As for those inclined to believe this whole incident is just an elaborate smoke screen, McDowell has an answer for that, too:

“I see a lot of people suggesting that the loss of Zuma is a front, a cover to hide a successful insertion in a secret orbit or some other scam. This is JUST NOT PLAUSIBLE for many reasons. I am confident other experts on the subject will agree with me.” 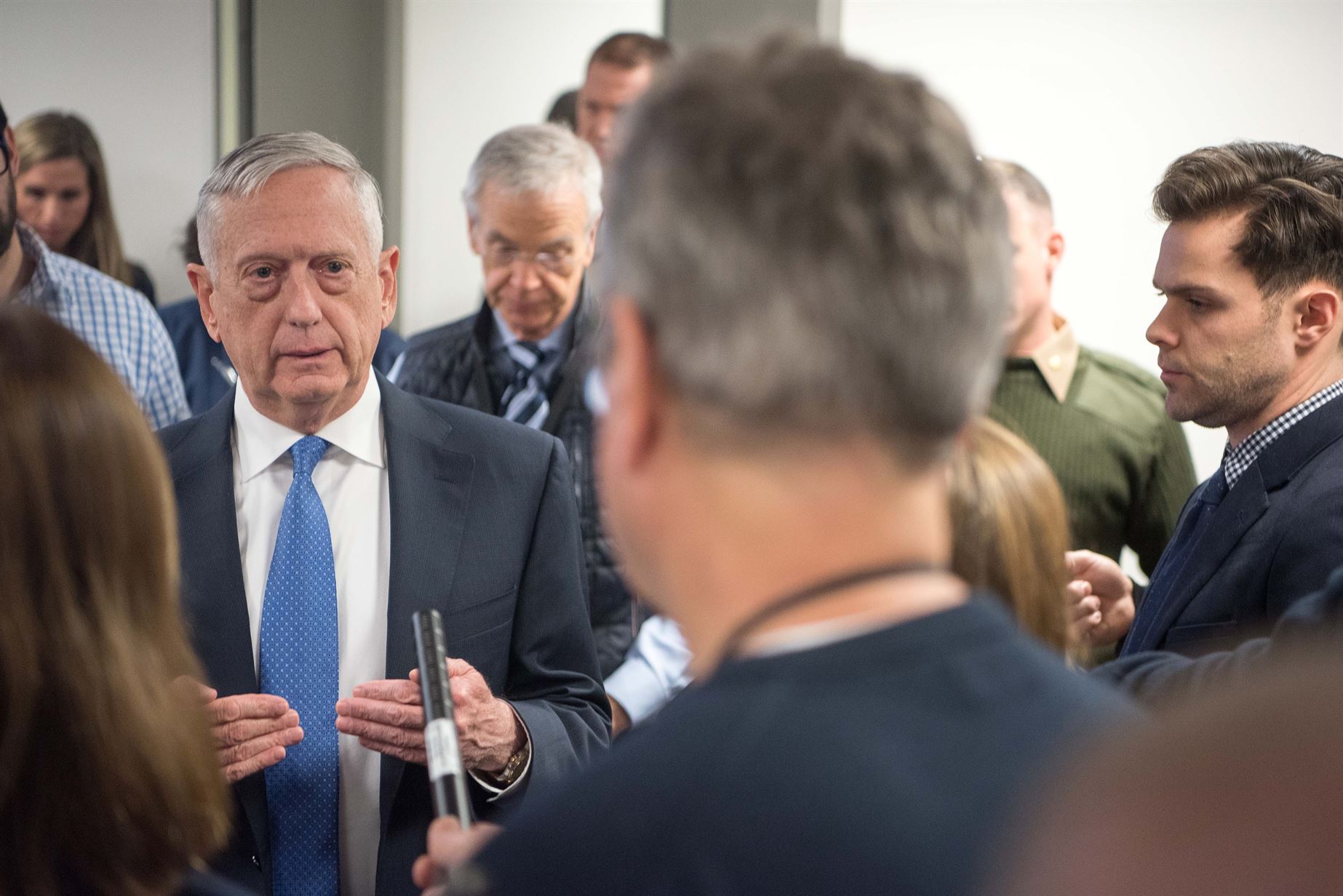 The Pentagon and the rest of the federal government are still waiting for Congress to pass a budget for fiscal year 2018. Meanwhile, DoD is finishing up the initial draft request for fiscal year 2019. If you recall a year ago, we were hearing about a big military spending surge coming in 2019 and that 2018 would be a transition year for the Pentagon to recover from the Obama-era cuts. Oh well, that timeline quickly was derailed by partisan fights and internal divisions in the GOP over spending priorities. The latest word from Deputy Defense Secretary Patrick Shanahan is that there will be a big increase, but in 2020.

Defense industry insider James McAleese says Pentagon and its contractors should continue to hang on to hopes of a buildup as long as Defense Secretary Jim Mattis is in charge. His “personal credibility and charisma” help on Capitol Hill, McAleese says. “Any sudden departure of Secretary Mattis would definitely slow the growth trajectory of 2019-2023 defense funding.”

Will space programs see a boost? Unclear for now. “Industry CEOs have strong insight into immediate USAF programs [like the F-35, the B-21 bomber] but have very limited insights” into longer term priorities such as laying the foundation for a future space corps, as Congress directed in the National Defense Authorization Act.

Some hints about future space investments might surface later this month when the Pentagon unveils a new “National Defense Strategy.” Mattis told reporters the strategy will be rolled out Jan. 19. Pentagon spokesman Col. Robert Manning said on Monday that the strategy was still “in staffing,” and that neither Mattis nor President Trump had yet approved it. 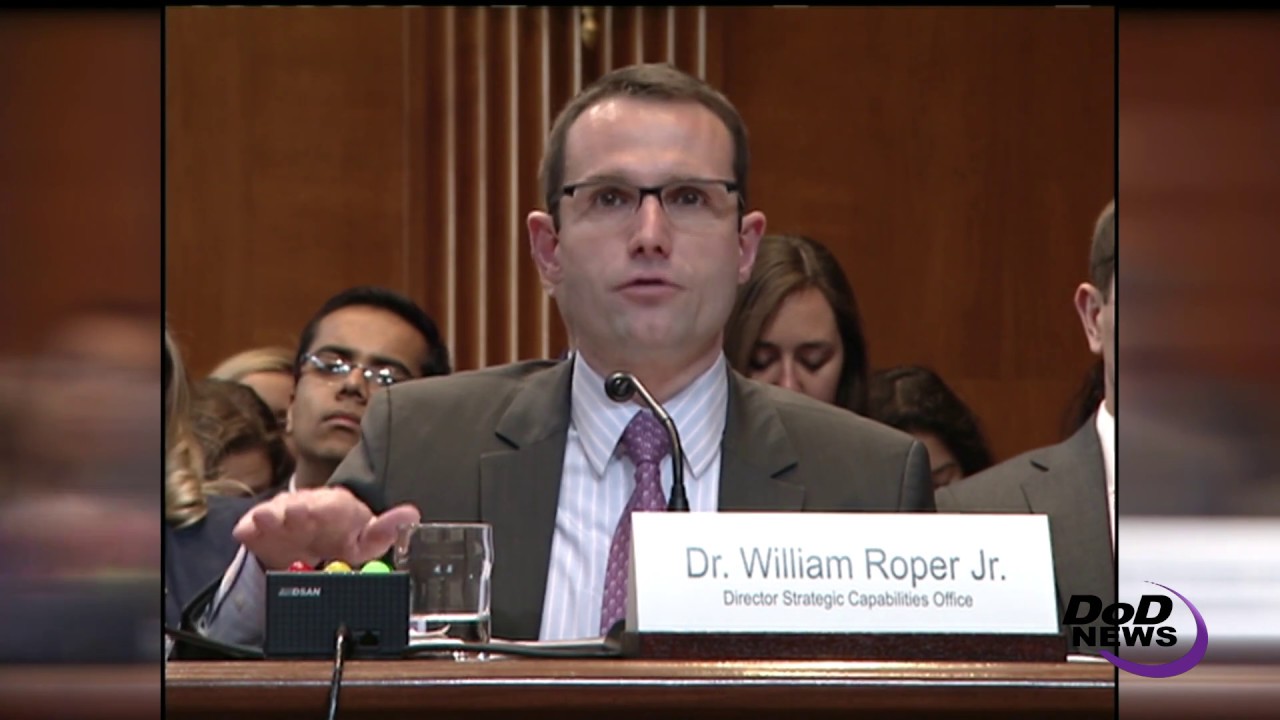 News last week about the nomination of Pentagon procurement “disruptor” Dr. Will Roper to be assistant secretary of the Air Force for acquisition stirred up speculation about how he might tackle space modernization. If confirmed, Roper stands to bring a new perspective to Air Force big-ticket acquisitions, including space systems. Roper founded the Pentagon’s “strategic capabilities office” to advance efforts to inject innovative technology into the military. He has criticized the Pentagon procurement bureaucracy for over-designing systems and building “exquisite” hardware instead of tapping less costly off-the-shelf commercial technology to update existing weapons. How Roper might steer the Air Force to use more commercial technology will be closely watched by the space industry, a sector where privately funded innovation is booming. The Air Force has been criticized for not taking advantage of the available technology — in launch, satellites, software and other areas — and integrating it more quickly into military space systems.

Air Force Secretary Heather Wilson was brutally candid during a Q&A session Friday at a Washington Space Business Roundtable event. The government and the Air Force are “hard to work with” and arcane procurement methods will continue to scare away many companies in the space and technology sectors that otherwise would consider jumping into the military market. “I also know that a lot of small companies aren’t going to work with us,” Wilson said. She highlighted the remarkable achievements of startups like small-satellite maker Planet and low-cost launch provider Rocket Lab. The Air Force, however, intends to continue to produce military-unique satellites and launch vehicles because of its sensitive national security requirements. 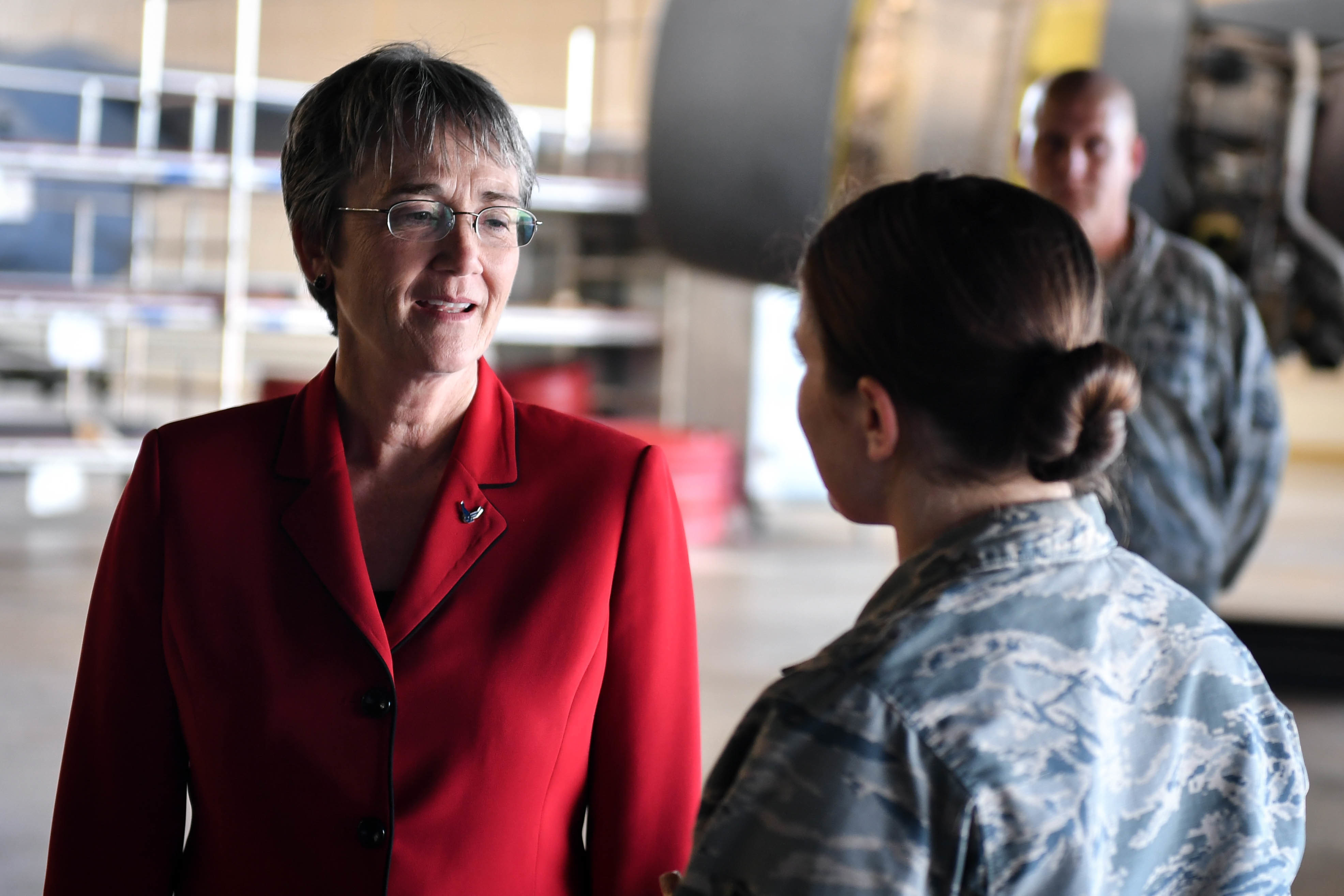 After our story was published, I heard from government contracting expert Karri Palmetier who advises small businesses in the Denver area. “Secretary Wilson summed up the dichotomy facing the DoD and other government agencies,” Palmetier said. “Reform is needed to allow innovation because DoD ‘is hard to work with’ but the military has unique needs. The trick will be to find ways to use, adapt, modify, and/or overhaul the acquisition system to find ways to adjust to each acquisition as appropriate. This also means an acquisition workforce that can is trained properly to handle the different processes.” And oh by the way, “Industry loves to point fingers at the DoD being the cause of all the problems and the truth is not that simple.”

A huge week for Orbital ATK 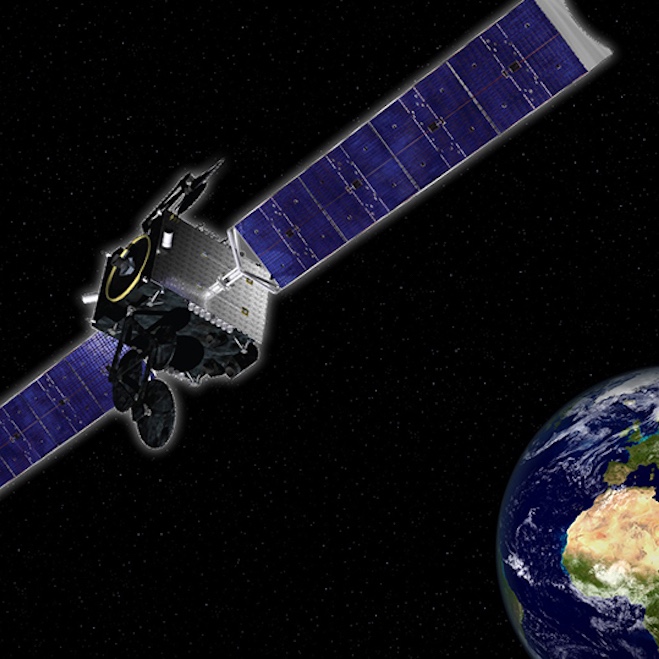 The company scored major deals over the past few days. Only months before Orbital ATK’s first “mission extension vehicle” known as MEV-1 is scheduled to go to high orbit to service an aging Intelsat satellite, the company signs an order for a second vehicle, the MEV-2.

Tom Wilson, president of Orbital ATK’s Space Logistics subsidiary spoke with SpaceNews about the MEV-2 project and dropped hints about a new robotic vehicle the company will unveil in March at the Satellite 2018 trade show.

Orbital yesterday also announced it received another Intelsat contract to build the Galaxy 30 communications satellite. The satellite will be based on Orbital’s GEOStar-2 satellite platform. Galaxy 30 will be the 11th satellite Orbital ATK has built for Intelsat, and represents the first satellite in the Galaxy fleet replacement program.

The next phase of the NGL program is expected to begin when the Air Force awards Launch Services Agreements in mid-2018.

Orbital ATK, meanwhile, soon will be merged with Northrop Grumman Corp. Over time details will emerge on how both companies’ space businesses will blend together. Northrop Grumman is said to have a growing classified space portfolio. One of these secret payloads was Zuma.

General Atomics Electromagnetic Systems announced last month that it received a contract from the Department of Defense Ordnance Technology Consortium for the Army Resilient Global on-the-move SATCOM, known as ARGOS. The small-satellite network was intended to provide Ultra High Frequency and Very High Frequency beyond line of sight communications and unattended ground sensor data capture capabilities for the U.S. Army. GA-EMS has successfully flown eleven satellites. But the project might be in danger as the Army decided to end its financial support after this year. Lira Frye, a spokeswoman for the Army Space and Missile Defense Command confirmed the budget for Argos was zeroed out for 2018. “The Army is moving in a different direction,” Frye told SpaceNews. 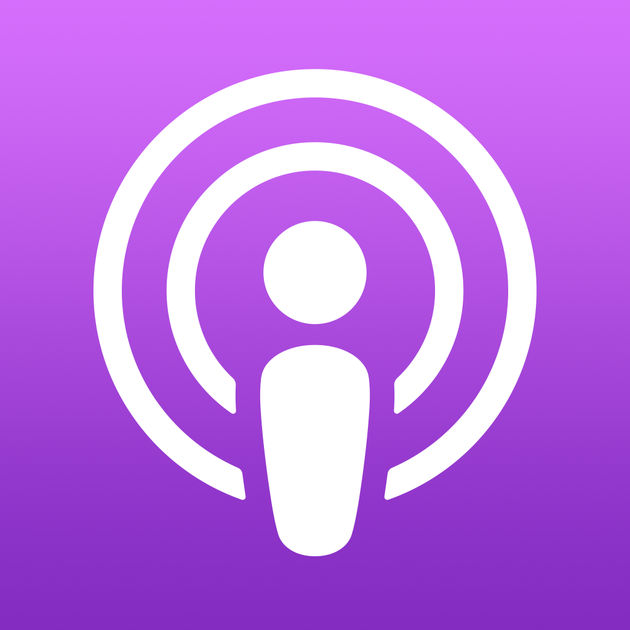 Bob Gourley was part of the first operational joint task force for computer network defense at the DoD and has seen cybersecurity truly evolve. As part of Kratos’ Constellations podcast series exploring new issues shaping satellites and space, Bob (now  co-partner and partner of Cognitio) discusses everything from encryption, forensics, connected aircraft to the NIST framework.

In this episode of Constellations, Bob discusses the new threat landscape, space, and the next generation of cyber threats coming from satellites. Methods and tools for deterring, protecting, detecting and adapting to malicious cyber activities are always changing and improving, but good guidelines for managing these threats are out there and this podcast will tell you where to find them.

Get these and more Constellation podcasts at http://www.kratoscomms.com/constellations-podcast/episodes.