TAMPA, Fla. — German satellite startup Kleo Connect’s majority shareholders are challenging a deal they say minority investors illegally devised to give its spectrum to Rivada Networks, which plans to use the frequencies for its own low Earth orbit (LEO) constellation.

U.S.-based technology firm Rivada announced plans March 21 to use Kleo as a springboard for deploying 600 broadband satellites after acquiring EightyLEO, a European investment vehicle with a minority stake in the German startup.

Rivada CEO Declan Ganley told SpaceNews in an interview his company took spectrum rights away from Kleo’s majority Chinese shareholders by separately buying a majority of Trion Space, a Liechtenstein shell company that controls the filings.

However, a shareholder dispute around how this arrangement came together has split Kleo into Chinese and European factions, each with competing claims to the LEO project’s future.

Rivada bought 85% of Trion from Liechtenstein entrepreneur Michael Frommel. The rest of the shell company is held by Chinese investors through their majority ownership of Kleo that, according to Ganley, is mostly held through an investment vehicle with ties to China’s government.

In a news release published on China’s Kleo-connect.com, the Chinese faction said a Feb. 28 meeting between Trion, Kaiser and Meister “secretly and illegally represented the company, violated the governance and contractual obligations of the company, and tried to lay the grounds for an infiltration of the KLEO project by RIVADA Networks.”

The news release said Kleo minority investor EightyLEO was seeking to engineer a “hostile takeover” of Kleo by Rivada at the expense of majority shareholders that have invested heavily in the startup.

“[Kaiser and Meister] have no right whatsoever to use the company’s name, business model and IP rights,” states the Chinese faction’s Kleo-connect.com site, adding that it is “currently pursuing all legal remedies against this attack.”

Europe’s Kleoconnect.com site says: “We established this site because one side in this dispute has seized control of KLEO Connect’s web site and seeks to use it to create the appearance that their side has prevailed before the courts have even had a chance to weigh in.”

In an April 9 news release, the European faction said shareholder representatives on both sides had sought to revoke the appointment of all four managing directors during a March 21 meeting.

In a temporary injunction March 31, it said the Munich I Regional Court had ordered Kleo to continue treating Europe’s Meister and Kaiser as managing directors without restriction.

“This applies until a decision is made on the merits of the case, which may take several years,” stated the news release, which added: “The Chinese side has applied for several similar and in some cases more far-reaching preliminary injunctions, but these have all been rejected by the courts (so far).” 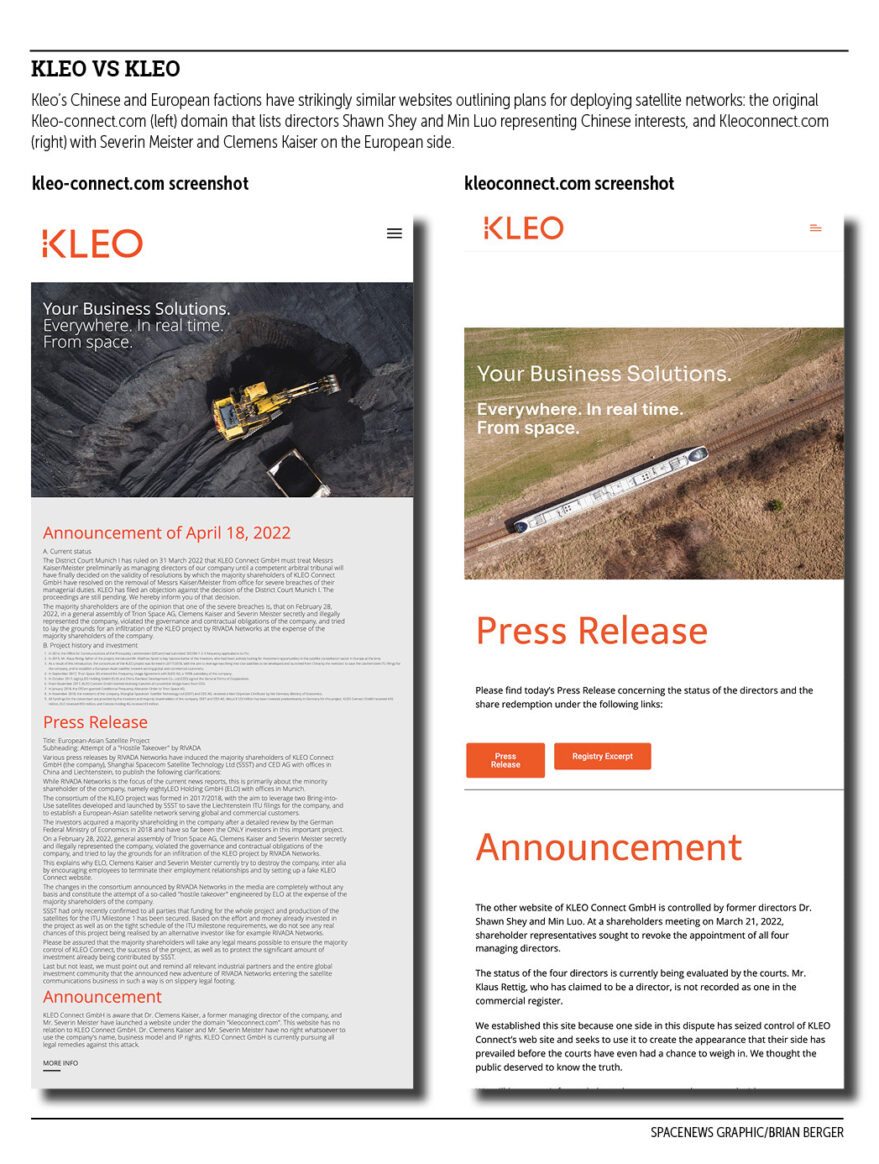 Ganley said Rivada has made an offer to buy out the Chinese investors to get a clean break from the group, although he is confident its majority control of Trion means its constellation plans can go ahead regardless.

“Nothing is going forward, decisions are being blocked by the Chinese side, the entire technical team and engineers recently left the company,” Rigolle said.

“They are all behind the project in principle, but no progress is possible due to the dispute between the investors.”

Asked whether the disputes stem from China seeking greater control of the constellation plans, he said “it seems that the Chinese side wants to use the European shell to launch a Chinese satellite project.”

Rigolle, a former CEO of O3b Networks (now part of SES) and failed LEO startup LeoSat, said “a radical change in the shareholder structure is the only way to successfully implement the project.”

Brian Carney, head of corporate communications at Rivada, said Trion was in danger of losing its spectrum filings before it bought a majority of the shell company.

Although Kleo brought those filings “into use” April 2020 with two satellites that were built and launched by China-based companies, Carney said Trion had a March 3 deadline to file an acceptable business plan to the Liechtenstein regulator.

“We stepped in, bought the company, and saved the project,” he said.

Rivada has issued a request for information to space vendors amid plans to start launching a constellation of Ka-band satellites with “gigabit speeds” from 2024.

The company said it has set up a German subsidiary called Rivada Space Networks to spearhead the efforts.

Rivada Space Networks aims to leverage its parent’s spectrum sharing and other terrestrial networking solutions to give it an edge over OneWeb, Telesat Lightspeed and other LEO startups also planning to sell capacity to enterprise and government customers on a wholesale basis.

Rivada has to launch 10% of its planned 600 satellites by September 2023 to keep its frequencies under regulatory rules that govern the spectrum, and Carney said it has not decided whether it needs to seek a waiver.

Existing Rivada shareholders have committed to financing some of the project costs, he said, adding: “We are in active discussions with financiers and are not prepared yet to reveal projected costs, except to say it will be in the billions.”

Despite giving Kleo’s Chinese shareholders what he feels is a fair offer, Ganley said he does not expect they will let Rivada buy them out.

He anticipates “a whirlpool of litigation for years,” but said “it is amputated from the rest of” the company’s constellation plans.

“From an investor standpoint, from our shareholders’ standpoint, the focus is on execution and getting the Rivada Space Networks operational and constellation operating, and that amputated situation is not going to affect that … it can’t,” he said.