What is often overlooked in today’s space strategies and policies is the need for a robust space attribution process. That is the ability to trace the origin of an action against space architectures. Without being able to determine the origin or source of a hostile or malicious action, the ability to respond appropriately seems doubtful.

Using lessons from the nuclear community and insights from decades of experience operating in the space domain, a sound space attribution framework should include data and information from multiple sources. Attribution should be thought of as a process, not as a singular event or piece of knowledge.

Because of the relative newness of space as a warfighting domain, it can be helpful to consider attribution frameworks from other efforts. In particular, space attribution can benefit from considering nuclear forensics and attribution. The nuclear attribution process incorporates data and information from nuclear forensics, the intelligence community (IC) and law enforcement to inform national leadership on the origin of source material and technology used in a nuclear detonation. 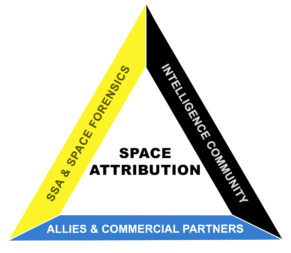 A useful framework for attribution in the space domain should not be expected to look exactly the same as that used for nuclear attribution because of, in part, the international nature of space and differences between the operational environments. So, taking into account an understanding from the nuclear community that a broad and coordinated attribution framework works best, along with insights from decades of operational experience within the space domain, a practical space attribution framework should include space situational awareness (SSA) and forensic science capabilities, the IC, allies and commercial partners.

SSA, along with the associated space domain awareness, is the linchpin for the space attribution process. According to U.S. joint doctrine, space situational awareness refers to the “requisite foundational, current, and predictive knowledge and characterization of space objects and the operational environment upon which space operations depend.”

Capabilities for SSA exist today and can be governmental and commercial in nature. For example, the Space Surveillance Network, including Space Fence and the Geosynchronous Space Situational Awareness Program, currently supports SSA collection and dissemination. Commercial companies such as AGI, ExoAnalytics, and LeoLabs support the collection, interpretation, and dissemination of SSA data and information. To increase SSA transparency, U.S. Space Command’s internet portal space-track.org is used for sharing space situational awareness services and information among governmental, commercial, and academic entities.

Despite its importance, SSA alone is not enough to enable space attribution. For example, while many of today’s SSA ground and space-based capabilities may be used for collection against kinetic actions — such as direct ascent and co-orbital anti-satellites — additional capabilities are needed to more effectively collect against non-kinetic actions, such as jamming, lasing, and network attacks. In particular, forensic science capabilities will improve the process of attributing non-kinetic actions in space.

As used here, space forensics refers to the science of analyzing and determining the source and pathway of an attack against space architectures after such an attack has occurred. Space forensics includes scientific methods to gather data and information from satellites, ground systems, and associated networks regarding actions that are non-kinetic or kinetic, and reversible or non-reversible. Because many space architectures use networks and computers, the required forensic evidence may include digital forensics and signatures — or “electronic fingerprints” — received through space, ground, and user segments.

For attacks or hostile actions in space, the attribution process may lead to a military response. Yet for less serious acts in space, attribution may lead to prosecution through civilian courts or diplomatic admonishment. Because of the possible need for space forensics evidence to be deemed admissible in a court of law, collected forensics data should remain pristine, using law enforcement chain of custody procedures. As a result, the Federal Bureau of Investigation (FBI) may need to be part of the space forensics evidence collection, while also potentially including International Criminal Police Organization (INTERPOL).

Any military and law enforcement cooperation will need to observe U.S. federal law regarding posse comitatus, or the general prohibition of military personnel from direct participation in law enforcement activities.

Per U.S. Executive Order 12333, the IC collects information needed by the president, the National Security Council, the Secretaries of State and Defense, and other Executive Branch officials for the performance of their duties; produces and disseminates intelligence; and collects information concerning hostile activities directed against the United States.

Commensurate with its general responsibilities, the IC should support the space attribution process in gathering raw data and information, analyzing that data and information in context, and producing timely and relevant products. The intelligence gathered will be used to inform how, where, and when harmful interference or an attack against U.S. space architectures occurs.

Using current organizational structures, the National Space Defense Center (NSDC) is well-suited for coordinating IC input into the space attribution process. Regarding its roles and mission, the NSDC is said to be “a partnership organization, strongly supported by both the Department of Defense and Intelligence Community, that develops and improves U.S. ability to rapidly detect, warn, characterize, attribute and defend against threats to our nation’s vital space systems.” The NSDC is stated to be the first serious effort to combine military and IC community resources to gather and share data about possible threats to U.S. satellites and supporting infrastructure.

Commercial partners will also enhance the space attribution process, because of the sheer number of commercial small satellites presently operating, along with those constellations planned for the future. The ongoing growth in proliferated low Earth orbit satellites has led to large commercial constellations performing communications, Earth observation, change detection, data analytics, and other activities. Some commercial satellite communication providers may have comprehensive knowledge and digital forensics capabilities concerning interference and attacks against their networks and those of other satellite operators, which can be used to inform attribution.

The Commercial Integration Cell, which operates within the Combined Space Operations Center, could help integrate commercial capabilities into the attribution process.

Recommendations on the way forward

Increase SSA and forensic capabilities. DoD should develop and acquire robust SSA and forensics capabilities for not only kinetic events like anti-satellites weapons, but also non-kinetic events like lasing, jamming and network attacks. These collection capabilities and methods should be developed for the space, ground and user segments. DoD should investigate and better understand how to keep forensic data pristine, or uncorrupted, so that the validity of data and information is not called into question. Consequently, law enforcement involvement — such as from FBI and INTERPOL — may need to be integrated into space-centric events like exercises and wargames. This will help ensure that a chain of custody process is followed for evidentiary data, to support potential prosecution in a court of law.

Include allies and increase transparency. U.S. officials should consider the Combined Space Operations initiative as a framework for including allies in space attribution. Also, U.S. Space Command should look to include the space attribution process into Operation Olympic Defender, which is an international effort meant to strengthen deterrence in space and to prevent the spread of space debris. By including the global and numerous capabilities of allies and international partners, attributing the source or origin of an attack may be reached more quickly and with higher confidence. Including allies will lead to increased transparency and build confidence in the U.S. space attribution process.

In the years to come, the need for attribution in the space domain will only increase, especially as U.S. activities and interests expand toward cislunar space and beyond. A belief that attributing hostile or malicious actions in space will be a simple process is wishful thinking. The means and methods of attributing action in the space domain must be debated, rehearsed and refined. Implementing the requisite means for space attribution will likely entail additional fiscal resources. The cost is low when compared to the disastrous effects caused from an event that a robust attribution process seeks to deter.

John J. Klein is a senior fellow and strategist at Falcon Research Inc., and adjunct professor at George Washington University’s Space Policy Institute. He is the author of the books Understanding Space Strategy: The Art of War in Space (2019) and Space Warfare: Strategy, Principles and Policy (2006). The views expressed in this article are solely those of the author and do not necessarily reflect those of Falcon Research, George Washington University, or the U.S. government.