An enduring streak of large private investments not seen the space industry’s six decades of existence has taken hold in the past several years.

By Northern Sky Research’s count, the space sector has garnered close to $32 billion in investments since the current wave of financing started in 2014 when Google paid $500 million for Skybox. While $32 billion pales in comparison to the inflation-adjusted $288 billion the United States shelled out during the 1960s to beat the Soviet Union to the moon, the unrestrained spending NASA marshaled to win the Space Race seems to be finding an echo in the current wave of thoughtless investments.

But this time, there’s no moon-or-bust crash program driving the influx of capital. Instead, we are seeing a rush to write blank checks without detailed consideration for what commercial enterprises worldwide value most: the market.

More funds are going into private space entities than ever before. In 2020 alone, investment in space companies hit a record $8.9 billion — $2 billion more than 2019 — despite a pandemic that disrupted the broader economy. This year is off to an even faster start with no fewer than four space companies going public by merging with special-purpose acquisition companies, or SPACs. Sometimes called “blank check” companies, SPACs raise money by issuing stock before setting out to buy a promising business with the proceeds. The enterprise valuation of recent targets is notably sky high and looks completely disconnected from the real value of the acquisition target’s potential market.

This current deal trend creates the unsettling feeling that proper due diligence on expected performance is very light as the race heats up to grab funding quickly.

Notwithstanding risks of inflation and higher interest rates that could put a serious damper on cash available to invest, the past several years have been rife with questionable investments — from fabulously ‘out there’ ideas to seemingly more earthly ‘reasonable’ ones, many of which led to nowhere, not even orbit.

Space is a hot market for financiers right now. Yes, believers are needed to help great ideas take off, and convincing would-be backers is a major undertaking for any startup.

However, financing decisions should be based on more than the belief that being a “disruptive force” is enough to make a company a market leader. Even when a company’s ideas merit attention, ideas alone don’t make a business case close.

If the past is any indication, one long-ago experience may bring some rationality in the expectations of the market and the optics for those watching this space.

In 2008, Iridium was looking for quicker access to public markets to finance its next-generation constellation. It took them 18 months to go public through a SPAC in what was a very novel transaction at the time for the satellite industry. The deal gave them a market value of $591 million on revenues of $321 million, cash on hand of about $400 million, and a projected 20% annual revenue increase (thanks in part to a competitor’s failing satellite network).

The story that followed was not all rosy; they still needed public bank guarantees through export credits to finance their Iridium Next constellation. But many hurdles were addressed that led them to generate more than $4 billion in revenues over the next 10 years. And until 2019, this revenue was largely from Iridium’s initial constellation, a freebie thanks to its earlier bankruptcy. This part is important because the ‘no-CAPEX, only OPEX’ years led to a profitable bottom line in just a few years after Chapter 11, and that attracted the attention of the public markets.

We can say safely it allowed them to embark on the successful $3.6 billion CAPEX spend for the high-risk, second-generation constellation using an unproven SpaceX rocket. The gamble paid off and its stock price since the SPAC quadrupled. Today, Iridium is a dominant player in the mobile satellite services (MSS) market with sales of $580 million, profits at record levels and market capitalization of $5.4 billion. Worth noting: Iridium has benefited greatly from government contracts, which is almost a must for many startups today. The deal today looks like it was built by geniuses who got their money back and more: a ratio of market cap-to-revenues of 1.84 with hundreds of millions of dollars in profits and billions in total revenues.

Is this the near picture-perfect portrait that one should demand of space companies seeking to go public through vehicles such as SPACs? Maybe not, but some degree of realism helps paint the true color of the landscape. 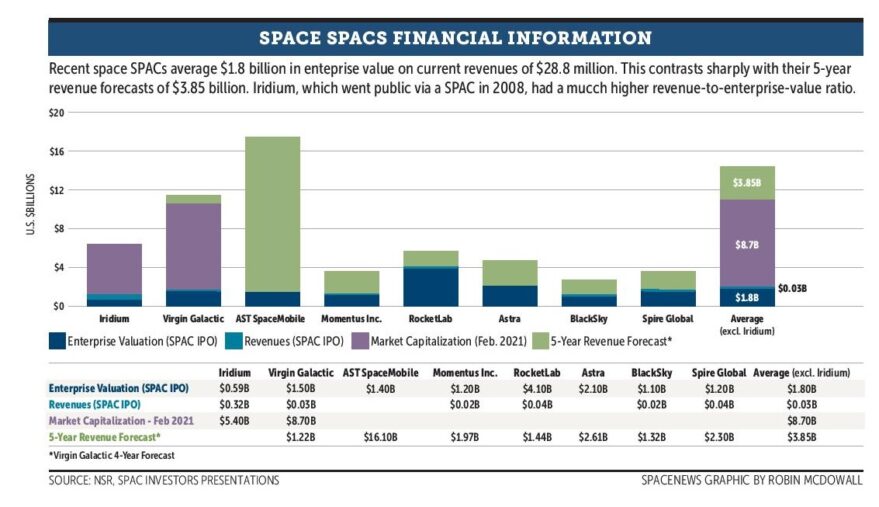 VALUATIONS THROUGH THE ROOF

Across all industries, SPACs raised a record $83 billion in 2020, according to The Washington Post. Let’s remind ourselves that SPACs used to be the last wagon to hitch for companies wanting to go public. It has now become a locomotive in part because many SPACs must close a deal prior to their demise (usually in two years) and if not, lose their investors’ money. Any sector of the economy is a good target and SPACs offer, through warrant redemption, an exclusive path to what some have called a ‘win-win’ situation, no matter the target’s success.

The recent spree of space SPACs are marked by unrealistic projections. Not counting Iridium, the average space SPAC has a $1.8 billion enterprise valuation built on assumptions it can grow $29 million in revenue to $3.85 billion within five years. Virgin Galactic’s market capitalization as of early March was $8.7 billion. Compared to the Iridium situation, the average enterprise value of current space SPACs is three times higher, the market cap is 1.6 times higher, and revenues are 10 times lower.

Enterprise value variables such as profitability, intangibles and future prospects are all important when investing, but it seems intangibles are overshadowing profits and market prospects. And even in the case of market forecasts, sentiment is drowning out everything else that must be considered, such as competitive forces, regulations, supply and demand, and bottom-up forecasts countered with top-down addressable market verification.

For space markets to grow at the bewildering levels promoted in investor presentations, how much revenue can be realistically generated to turn SPACs into genuine billion-dollar companies? Oftentimes, a well-thought-out business is secondary to the promise of huge potential future revenues.

We see too many Econ 101 principles discounted and with only lip service paid to solid market analysis. As if making the technology work guarantees big bucks. But a great technology does not a market make. Just ask Sony about Betamax.

WHEN THE RUBBER MEETS THE ROAD

Some say raising money is a business plan in itself. That may be true for many new ventures, at least until the rubber meets the road. That means taking your offering out of the garage and putting it into high gear to make real money.

Of the emerging space market companies that received investments over the past 20 years, recent NSR data shows that 45% are currently operational, 42% are currently in the R&D stage, 8% are either dormant or shut down, and 5% have been acquired or merged. While the percentage of companies in the R&D stage hasn’t changed significantly since 2018, the past few years saw a decline in companies that are operational, a 31% increase in those that have shut down or gone dormant, and an 84% increase in those that have been acquired or merged with another company.

This trend shows that the realization of the market potential, i.e. the growth story, is both a huge effort and a terrifying road to drive for many startups. Some prefer to sell to another company, which can often mean a pivot from their initial business plan. The fact that the ratio of companies reaching operations is down does not bode well for exaggerated revenue projections we are witnessing.

The Financial Times recently described how unicorns — startups with at least a $1 billion valuation — are producing wildly exaggerated expectations while amassing losses at heights not seen since the dot.com bubble burst in 2000. It may well be that the current investment frenzy will meet a similar end if current SPAC targets rack up real losses while the revenue growth stories they’re telling investors fail to come true.

For all the talk about vast, untapped markets justifying big, upfront losses, there needs to be the assurance that proper, solid revenue projections were made based on actual, real-world events and solid assumptions.

But a dearth of due diligence and a rather shaky understanding of market forces make these projections look too good to be true.

SMALL MARKET AFTER ALL

This hysteria is exemplified by two recent examples: Astra and Rocket Lab. Both companies are in the hotly disputed smallsat launcher market and both plan to go public in the months ahead by merging with a SPAC.

Astra, a new entrant that has raised around $100 million and has yet to reach orbit despite two launch attempts, says the company will be worth $2.1 billion once it is public and foresees $2.6 billion in revenue over the next five years.

Rocket Lab, founded in 2006, has completed 16 successful launches in 18 attempts since 2017 and expects to close 2020s books with $35 million in revenue. Post-SPAC, it’s forecasting $1.44 billion in revenues over five years, of which $936 million will come from launch contracts. It’s computed enterprise value is a whopping $4.1 billion. If we looking at the very crowded market for smallsat launches in the addressable mass range of both Astra and Rocket Lab, NSR sees a $2.3 billion opportunity over five years, or about $400 million a year on average. Including the market for Rocket Lab’s just-announced Neutron medium-lift rocket starting adds another $1 billion, bringing the five-year total to $3.3 billion. Astra and Rocket Lab, between the two of them, expect to capture more than 100% of the forecast.

Let’s pause and consider the dynamics involved here. The smallsat launch market is currently getting blindsided as the likes of SpaceX and Arianespace offer smallsat operators cutthroat prices for rideshares on larger rockets. Doing the math, there’s no credible growth story for Astra to be valued at $2.1 billion and Rocket Lab at $4.1 billion without ignoring the pressure from major competitors cannibalizing a large portion of Astra’s and Rocket Lab’s total “available” revenues.

It also looks like elements such as reliability, performance, and getting satellites regularly to orbit (at the expense of other competitors) are ignored in the assessment. Perhaps the thinking is that price to orbit will grow significantly? Unlikely. With dozens of launchers planning to offer competition, price will eventually decline, and that will have the single largest impact on the bottom line of most launch providers. So capturing the total market and more is dreaming.

Most emerging space markets today are small, and yes, there is the potential that they will see very high growth rates in the coming years. But many, many, many ducks need to line up perfectly for that to happen. And also, well, because space is hard.

The downside of such ‘frothy’ valuation is that the belief factor in the industry could take a hard hit when one such SPAC or ill-advised investment goes wrong. And this is likely to happen soon after the effects of ‘real world’ market dynamics come into play, or when the U.S. Federal Reserve raises interest rates and thus steers investors away from speculative and risky endeavors.

Space is risky. Making it in the space business is even riskier. Once a business conquers space and is successful, it realizes the basic value for which it is built. And the realization of that value requires the endurance of countless challenges, which make unbelievable revenues and market projection look damning.

The space industry has tons of really, really good engineers and scientists but, regrettably, not enough good market, business, sales and commercial staff to make reasonable and sound business cases.

Thus, when investing in space, the weight given to market value needs to settle down and reflect a minimum level of appreciation that it is not easy to make money in the space industry. Making money in the space business is almost like counting to $1 million, one penny at a time, and less like writing a blank check.

From the Magazine investors