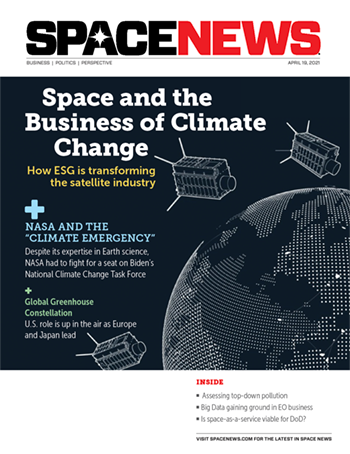 Download the digital edition of the April 19 issue of SpaceNews magazine, provided compliments of Blacksky.

Inside the April 19 issue:

1. Business of Climate Change
How ESG is transforming the satellite industry

2. NASA and the new urgency of climate change
When Biden won, many expected NASA would shift direction, emphasizing climate change over human spaceflight. Three months into Biden’s term, it’s increasingly clear those changes aren’t nearly as radical as some might have thought.

3. U.S. role up in the air
While China, Europe and Japan are making major investments in satellites to verify how well countries are fulfilling their Paris Agreement commitments, the U.S. is working on greenhouse gas sensors but currently has no plans for ambitious atmospheric monitoring.

4. Space and the new ESG business climate
The E in ESG is getting another boost as the United States rejoins the climate change fight, and space promises to play a central role.

Not a subscriber?  Sign up today to help support the industry’s trusted source of independent space journalism.