by Jason Rainbow — May 27, 2021
Phil Evans, who became director general of Eumetsat in January, speaks with SpaceNews about how the intergovernmental organization is reassessing the traditional playbook for a new weather-tracking era.

It will take decades to fully deploy a next-generation weather-tracking constellation for Europe’s Eumetsat, which aims to launch its first of six new MTG satellites for geostationary orbit (GEO) next year.

Rampant satellite innovation swirling around the intergovernmental meteorological organization headquartered in Darmstadt, Germany, and the changing role of the private sector pose novel challenges as it charts this long-term course.

MTG (Meteosat Third Generation) comprises four imaging (MTG-I) and two (MTG-S) sounding satellites, which will be identical to each other in their series.

Thales Alenia Space and OHB are building the new MTG satellites under a contract worth about 1.4 billion euros when it was signed in 2012. Arianespace will launch the first satellite on one of its last Ariane 5 missions in late 2022, kicking off a deployment campaign that will continue into the 2040s.

Phil Evans joined Eumetsat as director general at the start of this year to help the group navigate the fast-evolving industry.

Although previously a director at the U.K. and Republic of Ireland’s Institute of Physics, Evans spent most of his career in the U.K. Met Office, the British national weather service that interfaces with commercial companies.

He tells SpaceNews how Eumetsat, a 35-year-old intergovernmental group backed by 30 European member states, is evaluating its traditional processes to avoid being left behind amid the industry’s accelerating pace of change.

What are your priorities after becoming director general in January?

To really get to grips with the organization and the industry, from a personal perspective, although I’ve been heavily involved with Eumetsat for a long time. My career actually started out in spacebased remote sensing 30 years ago, and I’ve been a member of Eumetsat’s council. But in terms of the organization, I suppose it’s three things:

Firstly, the continuous operation of the satellites in orbit and the delivery of data and services to our users through the deployment of our new satellites.

Secondly, there’s a lot of innovation in what is called newspace in Europe — I’m not entirely sure how new it is but there’s an increasing recognition of what micro and nanosatellites can do, and also the different role for the private sector. So for those innovations, we’ve got to understand what that means for us as an organization and how we can engage with new approaches in a way that delivers maximum utility for our user community.

How are you drawing on your experience with the U.K. Met Office?

I think the biggest thing I bring is an understanding of the end-user perspective. What Eumetsat does contributes to a huge amount of socioeconomic and societal benefits. Whether in terms of helping forecast severe weather events or monitoring climate change, it’s enormous. But I’m very much thinking about end-users, and I’m thinking about how is what we are doing improving the utility for them. How is it delivering more value to society?

Where does Eumetsat fit on the international stage and how have your partnerships with NOAA and others changed over the years?

The weather satellite community is inherently international, and that’s a lot to do with the influence of the World Meteorological Organization, which has fostered collaboration across nations. We’ve had a long-standing relationship with NOAA, and the relationship is quite strategic for us. We worked on the initial joint polar system with them, and on the launch of our new platforms in the coming years that will form the new joint polar system. We work very closely on trying to align, for example, our approaches to ground segment work, and we’ll be looking to work very closely with NOAA to understand how new approaches to space can contribute to what we do.

We have strong relationships with all of the other agencies that operate weather satellites and work closely with them: China, Korea, Japan, Russia, India, etc. They tend to be more focused on the operational exchange of data. So we make sure that our satellite products are available to them and vice versa, but they’re very good and productive relationships.

And what about your relationships with commercial weather companies?

I think that’s the issue. One of the things that we’re doing, and this was agreed by our members, is we’re looking at options for how we might buy data directly from private sector suppliers. We’re in discussions with private sector companies where we’re looking to run a pilot project to buy a data feed directly from a company that’s running its own fleet of very smallsats. Effectively, we’ll be evaluating the technical quality of the data they’re providing and how it contributes to our end-users in terms of enhancing the quality of weather forecasting. But also we’ll be evaluating the business model by which we do this and the contractual arrangements.

Secondly, we’re involved in an ESA-approved Arctic Weather Satellite, a smallsat with a microwave instrument on it. The next stage in the development of that would be to establish a constellation of microwave satellites. Now, if that goes ahead — it’s yet to be decided — that would be an interesting foray for us to think about how constellations of satellites could help in what we’re doing. From my perspective, I think constellations of satellites are interesting, but people assume the benefit is cost, that they’re cheaper. Well, that may or may not be the case, but I think there are other benefits. One of the things that interests me is, in smallsat and constellations, there’s potentially better resilience, better revisit times, and also the technology refresh cycle can be that much quicker.

The life cycle for the reference platforms that we usually deal with is 20 years. So even though the platforms we’ll be putting up in the next few years are cutting edge, it’s a long time and innovations do come. So I think these are interesting areas. We’ll be looking at how we can work with newspace and startups.

That must be an interesting challenge for an established organization with a large membership?

What we need to do is understand what these innovations offer our members in a sensible and balanced way. We don’t want to jump into innovation just because it’s innovation, but conversely, we don’t want to be too conservative because we have a traditional approach — we need to make a balanced view.

My view is, if I was to look into a crystal ball, where we’ll end up is effectively recognizing that there is a system of systems. That the reference platforms that we operate, that have very high standards of quality and their sensing of the atmosphere is remarkable, their value will persist. But we can augment that with a wider system that includes constellations of satellites, that maybe operate with slightly lower technical specifications, but actually the overall system enhances the utility to our members and society.

It’s a classical problem of how an organization responds to innovation. Textbooks are full of private sector organizations that didn’t see disruptive innovation coming and they failed, but the challenges of dealing with innovation in a sensible way are just as true for governmental organizations. We need to respond to it appropriately and sensibly.

What’s the latest with your own MTG launch plans?

At the moment we are looking for launch [of the first imaging satellite, MTG I1] in the final quarter of next year. Obviously,that’s subject to change.

Instrument delays and COVID-19 prompted Eumetsat to shift the 2024 launch of the first sounding satellite, MTG S1, and the 2025 launch of the second imager, MTG-I2, to Ariane 6 because the initially contracted Ariane 5 is retiring in 2022. Is that still the situation?

Yes, at the moment it is.

How many of these satellites are under contract?

Will the last satellites in the series be identical to the first, or does Eumetsat plan for new technology infusion?

The satellites are identical in the series, as we procure recurrent identical satellites. Although there are no technology upgrades, the consistency across the series helps users make the most of them as adapting to new platforms takes quite a lot of effort and investment in systems and approaches. 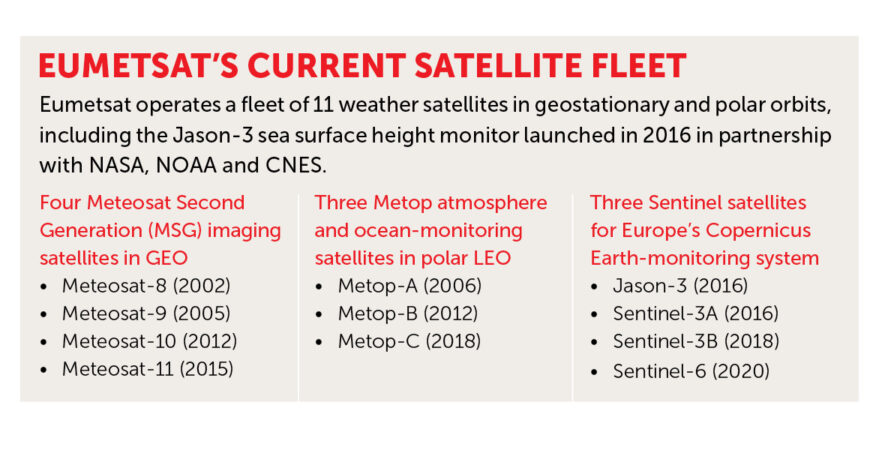 How will these MTG satellites Eumetsat will still be launching well into the 2030s improve weather data analysis?

Well, the instruments we’re flying are cutting edge and some of them unique. As an illustration, we’re flying a lightning imager on MTG that detects lightning flashes, which the U.S. has flown before but Europe hasn’t. It’s incredibly helpful because lightning flashes are associated with severe storms and you can track their location and see when they’re developing.

Very important in a ‘nowcasting’ sense, or very short periods that’s effectively saying what’s happening now. MTG will look at Europe every 2.5 minutes. That doesn’t sound very interesting but if you’re nowcasting about severe weather events and providing that information to an airline, it can be critical and have massive impacts in terms of safety and saving lives.

We’ve also got an infra-sounder instrument on our geostationary platform that we’ve not had before. This would bring valuable and new information to weather forecasters.

With MTG, you’ve got four-dimensional information about the atmosphere. You’ve got information in depth and over a geographical area. Because a geostationary satellite sits over one place, the revisit time is fairly rapid and you get a very dense set of information.

Has all the funding for these satellites been cleared?

For these, yes, for our mandatory programs as we call them. Basically when they’re being established, we agree with all our members — and it has to be with all of them — what the scale of the program is, what the envelope is in terms of how long they’re going to run, what we’re going to apply, what our operations are and the funding associated with those. So the funding envelope was agreed at the initiation of the programs.

How is climate change affecting investment attitudes for services like those Eumetsat is providing?

It’s an interesting question. It doesn’t change investment attitudes in us. We’re very well supported by our members and part of that is because what we do plays a crucial role to the operational forecasting activities they undertake. What I think it does and what I think is important is it increases our relevance, in the eyes of members and to society.

We operate a number of Sentinel programs and although it isn’t agreed yet we’re looking to operate a CO2 monitoring satellite from the EU Copernicus program … It does help funding security, I suppose, but it’s about strengthening our position and the role we play. It’s also motivating for our staff. A greater role we play in climate change is great for them and it’s great for people who are interested in working for or with us.

What’s next for the space-based weather industry?

For us, we’re in the final stages of developing our next-generation of platforms. Once that’s done, and it’ll be in a number of years, we’ll need to start thinking about future requirements for the next series of missions. That’s where it gets really exciting — when we start shaping that up, we’ll need to start thinking about what constellations of satellites mean for us. What’s the framework in which we’re going to operate?

Our platforms beyond the second-generation Metop polar system and MTG in GEO could be very different.

If you then also link that with what people are able to do with satellite instruments, through things like machine learning and greater supercomputing capacity, it becomes a really rich and exciting environment. As an organization, we’re going to have to hang onto our heritage and our expertise, but at the same time stretch our thinking in slightly different and more innovative ways.

This article originally appeared in the May 2021 issue of SpaceNews magazine.

From the Magazine climate monitoringEumetsat