Cyrus Capital Partners, a $4 billion investment advisory firm with offices in New York and London, said Intelsat appears to be headed for a Chapter 11 bankruptcy filing after it skipped a $125 million interest payment due April 15.

SES has started its own campaign for more money, arguing that “undisputed facts conclusively show that Intelsat and SES deserve equal shares of any accelerated relocation payments.”

Intelsat on Feb. 19 urged the FCC to give the company at least $1 billion more of $9.7 billion in proposed compensation for clearing C-band spectrum for 5G networks and to treat the C-Band Alliance Intelsat formed with rivals SES and Telesat as essentially dead.

In a Nov. 21 letter to the FCC,  Eutelsat told the commission that some proceeds from the spectrum sale should go toward covering costs satellite operators will incur moving out of the band, and to provide “incentive” payments to expedite the spectrum transition to new 5G users.

The announcement this week by the head of the Federal Communications Commission that he will seek a public action of satellite C-band spectrum is unlikely to be the final word in that debate, industry officials believe.

BREMEN, Germany — FCC Chairman Ajit Pai informed Congress Nov. 18 that the agency will run a public auction of C-band spectrum instead of allowing a consortium of satellite operators to sell it directly to 5G wire…

Satellite operators Intelsat, SES and Telesat on Nov. 15 detailed how they would calculate the proceeds they have pledged to contribute to the U.S. treasury if the Federal Communications Commission accepts their proposal to privately auction C-band spectrum sought by 5G network operators. 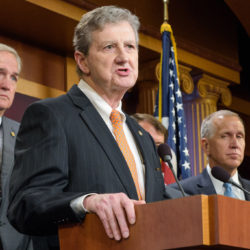 Sen. John Kennedy (R-La.) said the FCC should be able to clear the spectrum just as fast as the C-Band Alliance, if not  faster, by holding a public auction. 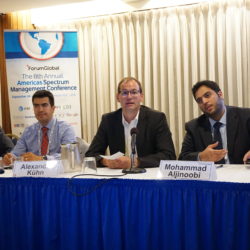 Spectrum regulators around the world want to see more C-band spectrum purposed for 5G cellular services instead of satellite communications, and could make it a topic of a future World Radiocommunication Conference, regulators said Sept. 25.

The Federal Communications Commission’s most vocal official on C-band spectrum rebuffed critics of a satellite industry proposal to repurpose some of the spectrum for cellular 5G through a private auction.