In early February, Hypergiant Industries, which describes itself as “the AI industrial complex for leading global enterprises and governments,” said it was creating this new division by acquiring a little-known startup, Satellite and Extraterrestrial Operations and Procedures, formed to commercialize a smallsat deployer called Slingshot that was being tested for the first time on the latest Cygnus cargo mission to the ISS.

So what will this company do? “Hypergiant Galactic Systems will focus on artificial intelligence-driven aerospace and astronautic software and hardware products for the booming space industry,” it said in a buzzword-laden press release.

Ben Lamm, chief executive of Hypergiant Industries, wasn’t much clearer in an email exchange. The goal, he said, is to create a “full-stack satellite intelligence offering” that builds, launches and operates satellites, and then analyzes the data to extract insights for customers. “If you just buy a satellite imaging company, you’re gated by what’s already up there and the data they’re collecting,” he said.

There are many satellite imaging companies, and others analyzing imagery. Will Hypergiant stand out from the pack in terms of the quality or quality of the data it collects, or how it analyzes it? “All of the above,” Lamm said.

“While there is much work happening in this field, we feel that there is a method that has the potential to deal with various issues associated with such work that would represent a fundamental leap in how data are collected, downlinked, stored, processed, distributed and transformed,” he explained. He didn’t elaborate on what that method is, or when the company would implement it, or at what cost.

At the very least, Hypergiant shows there’s no lack of enthusiasm about entering the industry, despite the growing number of companies in the field. However, it also suggests that the market may also be overheated, with too many companies chasing too few customers. But if the industry bubble is about to burst, many people in the industry aren’t too worried about it, yet.

If there’s one part of the space industry that seems the most primed for a shakeout, it’s the small launch vehicle sector. So many ventures have announced plans to create rockets for dedicated launches of smallsats that it’s hard to keep track of just how many are in development. At events like the SmallSat Symposium in Silicon Valley in early February, it was common to hear estimates of 100 or more vehicles in work.

Carlos Niederstrasser of Northrop Grumman Innovation Systems has been keeping track of small launch vehicles programs for several years. As of January, he had identified 112 such vehicles worldwide in various phases of development. That figure, though, includes at least 10 that have since gone defunct and another 10 whose status is unknown. Many of the others are still little more than concepts.

The number of failed launch ventures will “start increasing significantly in the next two years,” he warned in a presentation at the annual meeting of the Transportation Research Board in Washington in January. “It has to. The market is simply not going to be able to support 112 of these companies moving forward.”

There’s widespread agreement in the industry that there is an oversupply of small launch vehicles. “I think we are wildly oversupplied with launch concepts and capabilities at this time, given any reasonable forecast for future demand,” said Carissa Christensen, chief executive of Bryce Space and Technology, at the SmallSat Symposium. “So, particularly on the small launcher side, we going to see some shakeouts there.”

“I think it is 100 percent a bubble in the launch sector right now,” said Sunil Nagaraj, founder and managing partner of Ubiquity Ventures, during a panel discussion at the Commercial Space Transportation Conference Feb. 12 in Washington. He previously worked at Bessemer Venture Partners, an investor in small launch vehicle company Rocket Lab.

Nagaraj thinks some investors didn’t do enough due diligence on the launch companies they’ve funded in terms of their capabilities. “Some of my brethren have pulled into this sector and invested without pulling back three or four levels into the technology,” he said. 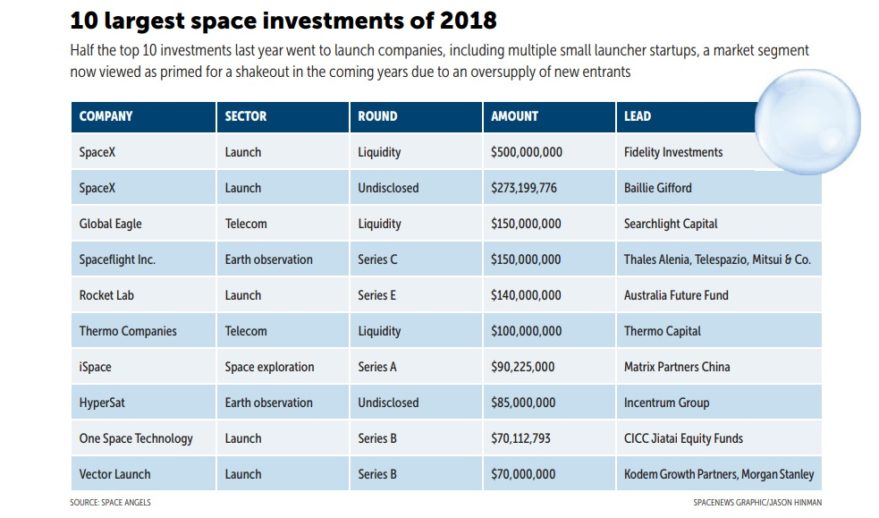 Even companies in the small launch market expect their ranks to thin in the next few years. “All of us are looking to get into large-scale production,” said Tom Markusic, chief executive of Firefly Aerospace, at the SmallSat Symposium. “If someone gets out there first with the right-sized launcher, and are launching reliably, it’s going to be very difficult, I think, for new entrants to get in.”

“I love it when I read about armchair analysts who say there’s going to be a shakeout,” Courtney Stadd, head of Washington operations for Vector, said. “As any teenager would say, ‘Duh.’”

Small launch is not the only part of the space startup ecosystem poised for a winnowing. Emmanuel Sauzay, director of commercial space at Airbus Defence and Space, noted at the SmallSat Symposium that there are many companies planning smallsat constellations to provide Internet of Things (IoT) services.

“There are a lot of ventures in the world right now doing IoT from space and how they differentiate themselves is not easy,” he said.

Other sectors, though, may take longer to shake out. Broadband megaconstellations have attracted a lot of attention, but as companies like OneWeb start to launch their satellites, it’s too soon to predict success or failure for that company or any other entrant in that field.

“I think we’ll get more clarity on business direction” in the next year, Christensen said. “I don’t think we’re going to see any of those companies fully drop out. I think we’ll see them move forward, more or less.”

“We can imagine there will be one, two or a maximum of three companies that are sustainable in the long term,” Sauzay said of megaconstellations. “The key moment is when we see there is a market for them. I think 2019 will be too early.”

Nagaraj said his belief that the small launch sector was currently in a bubble didn’t apply to other parts of the space economy yet. “Enabling infrastructure like ground station networks and small satellite constellations are in their prime right now,” he said. “Now the trick is finding business plans that don’t depend on raising $20 million before you get to see if it works.”

Adam Keith, an affiliated principal adviser with Euroconsult, expects the key period for companies in the Earth observation field to be 2020 through 2022 as new systems and new capabilities enter service.

“We’re a little bit fearful around that whole period,” he said at SmallSat Symposium. “If we don’t start to see results by that point that could be an issue from an investment standpoint.”

Investors, for now, don’t have an issue with emerging space companies as they continue to pour money into them. Space Angels estimated that there was $2.97 billion in equity investment in space startups in 2018, while Seraphim Capital, using slightly different criteria, estimated $3.25 billion in such investment in 2018. Both represented significant increases over 2017.

“I think that momentum is only going to build,” Mark Boggett, chief executive of Seraphim Capital, said during a SmallSat Symposium panel discussion. “There are a whole range of activities going on this year, 2019, in space that is going to maintain that momentum in the market. I think the outlook looks positive.”

Another panel at the conference, featuring investors from early stage venture capital to debt markets, were unanimous that investment would grow in 2019 even if there were signs of an industry shakeout. “It is my expectation that there will be a continued trend toward more investments at higher valuations,” particularly into “breakaway” companies in various market sectors, said Shahin Farshchi, a partner at Lux Capital. 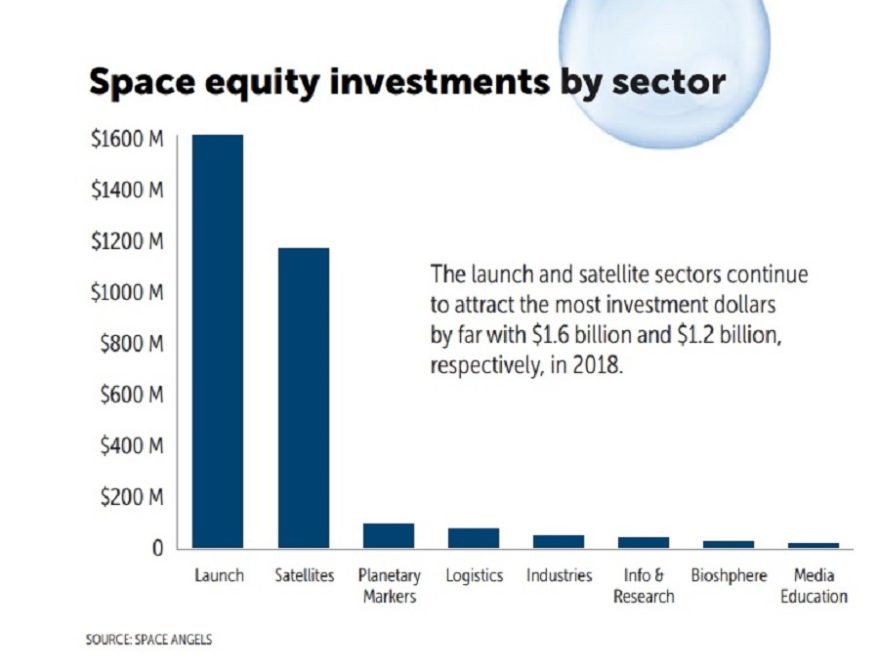 At least one investor there, though, was sounding the alarm. “I think there is going to be a massive crash in [quarter] 3 or 4 later this year,” said Tess Hatch, an investor at Bessemer. She said she was encouraging companies to raise money in the first half of the year “because next year it will be a lot more difficult to raise capital.”

Those problems, she said, were not linked to issues with the space industry itself but macroeconomic ones, such as a potential recession. She expects any venture-backed company, not just space startups, to find it hard to raise money.

Other investors are not as concerned about a lack of capital. “We believe that, in another 12 to 18 months, the capital will be there. It’s not going anywhere,” said Mike Collett, managing partner of Promus Ventures, which has invested in several space companies. “Great companies will get funded always.”

Collett said that venture capitalists are extending their investment timelines, buying more time for startups to provide a return. “The public markets are not operating like they used to,” he explained, with fewer options for startups to go public. “Private companies will be around much longer now.”

In space, some like Nagaraj worry that an impending shakeout in the small launch vehicle sector could leave investors, lured by advanced technologies but without a sustainable business, feeling disillusioned. “I don’t want a desert where VCs dip their toes in, get burned and then leave for another 10 years again,” he said.

That shakeout, others argue, is simply a natural part of the business cycle. “What a lot of us have been living for is a proliferation of actors, product differentiation, et cetera,” said Stadd. “A shakeout to me, paradoxically, is a barometer of health in our capitalist system.”

“Inevitably, I think, we are going to see some failures associated with companies that maybe looked as if they were on a path to success,” Christensen said. “That is not an indictment of this set of business ventures. That’s part of the normal process of this kind of business.”

Companies in the sector are moving ahead, aware that changes are likely to come soon but undaunted by the risks. “We’re starting to see some of the euphoria wear off, especially in the smallsat companies,” said Markusic. “It’s going to be a very interesting year.”

This article originally appeared in the Feb. 25, 2019 issue of SpaceNews magazine.